Vehicle makers continue to add autonomous features but not everyone thinks that fully self-driving cars are coming any time soon.

“I have a hunt camp north of Kingston and there is no way I am taking an autonomous vehicle down a road that you can’t drive down unless I am in a four-wheel-drive SUV. There’s no way it’s going to know where I am going,” said Smith. 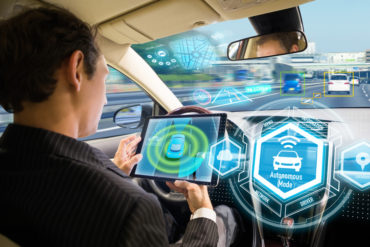 Vehicle autonomy was a recurring theme at Symposium West, produced by the Insurance Institute of Canada and held at the Cambridge office of Farm Mutual Re and the Ontario Mutual Insurance Association.

Many vehicles today have technologies (lane departure warning for example) that help the human drivers with some parts of the driving tasks. But having a feature like this does not mean the car is at Society of Automotive Engineers (SAE) Level 5, which means the vehicle can go at all times without human intervention.

“I don’t know. I doubt it. Will we get partly there? Yes,” said Kerr, the morning keynote speaker at Symposium West.

Kerr works out of Kitchener and lives in Stratford, which has Ontario’s autonomous vehicle innovation demonstration zone.

The automotive industry will continue to make progress on autonomous vehicles, said Kerr.

“Would your perspective on risk be different if I have a partially autonomous vehicle? What does that mean in terms of driving, what I am controlling? I don’t think we should ignore it. We should watch it,” said Kerr.

One Symposium West speaker who has sat in a self-driving car was Sergeant Gord Keen of the Ontario Provincial Police.

During a session on distracted driving, Keen said Thursday he rode in a fully autonomous car this past spring in Ottawa.

“I was scared, waiting for it to make a mistake,” said Keen. “When I was talking to the engineers, they said, ‘Don’t worry. In your lifetime, there’s not going to be fully autonomous vehicles.’ They were all pretty adamant that regardless of what level they reach, that person in the car is still going to be in charge.”

An example of an automation feature available today is advanced cruise control, which slows the car down if the vehicle in front slowed down.

“Right now, with all these other things – you are still in charge of that car and the same thing is going to apply when we have autonomous vehicles – someone is going to have to be prepared to take charge if something fails because we know that technology is not perfect,” Keen said Thursday at Symposium West.

“The more technology we add into the cars, the worse drivers we are creating,” said Keen. “There are so many things in my car now that are supposed to protect you – everyone counts on that, instead of counting on their own driving skills. Don’t count on your anti-lock brakes. Don’t count on your lane-departure system, don’t count on your all-wheel-drive – count on your skills. You see what’s happening – you can feel the road conditions are – you are the one in charge of that car. Not all that other stuff. It’s not going to save you.”