With the Ontario government ordering the closure of bars and nightclubs, this should eliminate – temporarily – one category of commercial liability claim.

“I don’t think claims will be launched against commercial hosts at this time,” said Mouna Hanna, an insurance defence lawyer with Dolden Wallace Folick LLP.

She was referring specifically to lawsuits arising from motor vehicle accidents in which the at-fault driver is impaired, and a business that served that driver alcohol is named as a defendant.

The COVID-19 pandemic prompted the Ontario government to declare a state of emergency, ordering several categories of businesses to close down. That was before further restrictions – on non-essential businesses – took effect earlier this week.

During the current state of emergency, Ontario restaurants are allowed to serve take-out. Initially the Alcohol and Gaming Commission of Ontario warned holders of liquor licences against serving any customer alcohol, but the government announced Thursday those rules would be relaxed. 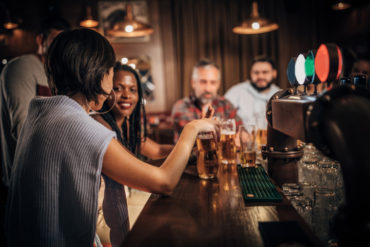 So under the relaxed rules if your client is a pizza joint with an alcohol licence, the client is still not allowed to open a beer and serve it to the customers while they wait for their pizza to cook. But what a licensee can do is sell an unopened container of alcohol to the customer that they can take home – the same way The Beer Store or LCBO sells alcohol for customers to take home.

“I don’t believe it changes the risk, as the patron is not consuming alcohol in the establishment,” Hanna said of the rule change. “Staff at the establishment are not monitoring alcohol intake or whether the customer is drinking to the point of intoxication. It really is no different than a customer buying alcohol at the supermarket or from the LCBO. They simply need to ensure they are not selling to minors.”

Liquor liability is a major exposure because if the client is not super careful, a customer could drink enough alcohol to exceed the legal limit to operate a vehicle. If this happens and the customer causes a collision that hurts an innocent person, the victim will likely name both the at-fault driver and the business that served that driver alcohol in a lawsuit.

And the establishment will be found at least partly liable if a judge or jury is convinced the motorist was served to the point of intoxication.

“In the past handful of years, we have seen an increase in claims involving commercial hosts, which ultimately impacts their premiums. As a result it has made it extremely difficult for some bars and restaurants to keep up with those premium payments and managing the increased risk exposure,” Hanna told Canadian Underwriter.  “Provided that commercial hosts are obeying the temporary closure rule, there will undoubtedly be a gap in claims involving the service industry.”

This does completely rule out the possibility of a claim, because a plaintiff might allege a client was serving alcohol despite the temporary ban.