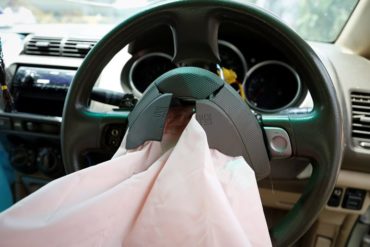 In this Monday, Nov. 7, 2016 photo, the exploded air bag that injured Rabiah binti Ibrahim hangs from the steering wheel in her Honda City in Slim River, Malaysia. Five Malaysians have died in accidents linked to faulty Takata air bags that are at the center of one of the world’s largest auto recalls. (AP Photo/Lim Huey Teng)

The indictments on six counts of conspiracy and wire fraud were returned Dec. 7 and unsealed Friday, just hours ahead of a Justice Department news conference to announce a corporate penalty against the Japanese company.

The charges were filed against Shinichi Tanaka, Hideo Nakajima and Tsuneo Chikaraishi. All three were long-time executives at Takata until 2015, and all three worked both in Japan and the U.S. Takata’s U.S. operations are headquartered in the Detroit suburb of Auburn Hills, Michigan.

The trio deceived car makers who purchased the inflators “through false and fraudulent reports and other information that concealed the true condition of the inflators,” according to the indictment. It alleges that the men knew back in 2000 that the inflators were not performing to specifications and had ruptured during testing.

Each was charged with one count of conspiracy to commit wire fraud and five counts of wire fraud for transfers of funds that occurred between 2012 and 2015.

Takata air bag inflators can explode with too much force, spewing metal shrapnel into drivers and passengers. At least 16 people have been killed worldwide and more than 180 injured. The faulty inflators have touched off the largest automotive recall in U.S. history involving 42 million vehicles and 69 million inflators.

“Defendants commonly referred to the removal or alteration of unfavourable test data that was to be provided to Takata customers as ‘XX-ing’ the data,” the indictment says. In February 2005, Tanaka told the others in an email that “they had ‘no choice’ but to provide manipulated data intended for distribution” to a particular automaker, the indictment stated.

In June 2005, Nakajima said in an email that “they had no choice but to manipulate test data, and that they needed to ‘cross the bridge together.’”

Multiple news outlets have reported that Takata will pay around a $1 billion penalty. The FBI has been investigating allegations that the company deceived federal regulators and tried to cover up the air bag problems.