OTTAWA – Bank of Canada governor Stephen Poloz says it’s hard to predict when the Canadian economy will rebound from the huge Alberta wildfire that destroyed communities and forced the shut down of crucial oil operations.

For Poloz, part of that calculation depends how quickly shuttered oilsands facilities go back online. 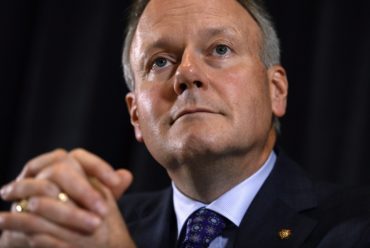 Bank of Canada Governor Stephen Poloz takes questions from reporters after speaking to the Canadian Economics Association at the University of Ottawa on Saturday, June 4, 2016. THE CANADIAN PRESS/Justin Tang

The other major factor, which is tougher to get a handle on, is when evacuees return to work and the rebuilding efforts are well underway, he said.

“And all those kinds of things (are) very, very much up in the air,” Poloz told reporters Saturday at the University of Ottawa when asked about the timing of an economic bounce back.

“It’s a very difficult situation for people, so we’re watching that with a lot of interest. And I don’t want to translate that into a mechanical thing.”

Experts like Poloz expect the disaster to have Canada-wide economic consequences.

Circle of life: @justinCgio checking out the greenery now returning to the burned out forest near Ft Mac #ymmfire pic.twitter.com/Eq32MATTC8

The central bank recently predicted the fire, which erupted last month in the province’s oil-producing region, will shave 1.25 percentage points off economic growth in the second quarter of 2016. However, it called its May 25 estimate a preliminary assessment.

In April, the bank had predicted growth at an annual rate of 1.0 per cent for the second quarter, as measured by real gross domestic product.

That means the fallout from the blaze could be severe enough to turn Canada’s already-feeble growth outlook for the second quarter into a contraction.

The Bank of Canada’s downgrade followed similar decisions by economists at some of the big banks.

On Saturday, Poloz predicted about half – or perhaps a little more than half – of the estimated loss of 1.25 percentage points would be due to lost oil output.

The rest of the decline is “much more highly judgmental,” said Poloz after delivering a lecture at the university that explored various implications of combining monetary and fiscal policies.

The central bank also said in its May statement that it expected the economy to rebound in the third quarter, once oil production had resumed and reconstruction had begun.

Poloz compared calculating the broader economic impact of the wildfire to the devastating floods that struck Southern Alberta in 2013. In that case, the rebuilding process that followed was gradual, he noted.

The Bank of Canada would try to give a better sense of the impact of the wildfire next month when it releases its monetary policy report, Poloz said.

“By then, hopefully, the picture is clearer and we can make better guesses,” he said.

Experts have estimated more than one million barrels per day of crude was taken offline because of the wildfire.

Alberta Premier Rachel Notley has said it will take years to recover from the disaster that destroyed 2,400 homes and businesses in Fort McMurray – nearly one-tenth of the city.

More than 80,000 people were forced to flee May 3 when the fire roared into Fort McMurray. Residents started returning last week to check their homes and to begin the massive clean-up.

In his lecture Saturday, Poloz focused on another topic: the impact of economic policy decisions on private and public debt loads.

He said private and public debt levels are closely influenced by the combination of how much the government spends and how monetary policy, such as the central bank’s key interest rate, is used.

Poloz said the optimal mix of monetary and fiscal approaches varies depending on the economic situation.

His lecture came as many countries around the world adjust their fiscal and monetary policy mixes in the hope of boosting stagnant economic growth.

The Trudeau government has shifted gears in recent months to seek deficit-fuelled growth by committing billions more dollars toward economy-enhancing investments such as infrastructure.

In his lecture, Poloz said a Bank of Canada model shows the combination of more government spending and higher interest rates leads to lower private-sector debt and higher public debt.

If the policy levels are reversed then private debt would climb and government debt would slide, he added.

Poloz stressed that finding the right balance is complex for policy-makers since high levels of private and public debt can both create financial stability concerns in an economy.

#FortMcMurray residents will be watching behind a fence while Team Rubicon steps into restricted areas of #ymmfire pic.twitter.com/gzvaESu1Ex

‘There’s nothing left:’ The story of one man’s return to Fort McMurray https://t.co/rNpV2puYEb

Updated: 'A look at how a wildfire consumed large parts of #FortMcMurray' https://t.co/QAmYpLEBc1 #ymmfire #FortMacFire