Business executives in Canada and the United States say economic risk (21%) is their primary concern, followed closely by cyber risk (20%) and technology risk (16%).

CNA Hardy released its first global Risk and Confidence Survey Monday. While over two-thirds of business leaders expressed confidence in the ability of their businesses to grow and prosper, Canadian respondents emphasized the potential for an economic downturn, triggered by U.S. trade wars. Canadian respondents also pointed out the related threats this would create in terms of increased tax, regulation, inflation, potential for a market crash, volatility and rising raw material costs, particularly steel. 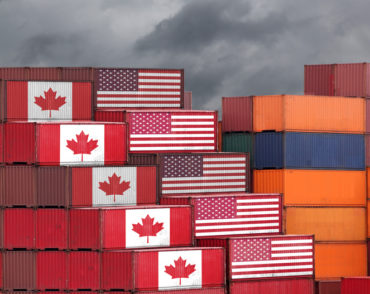 The survey polled 100 firms in Canada and 450 in the U.S. in a variety of industries, including financial services, professional services, tech and fintech, among others.

“The U.S. and Canada are experiencing the twin phenomena of high growth and high risk,” said Nick Creatura, president and CEO of CNA Canada. “The high levels of confidence among business leaders across North America appear to be driven by local factors, predominantly the strength of their economies. In contrast, risks are becoming increasingly global – such as trade wars and Brexit – which are beyond the immediate control of business leaders.”

A high percentage (86%) of U.S. and Canadian firms see the risk environment as being “high or moderately high,” dropping just 2 percentage points in six months’ time. Despite the high risk perception, with the economy cited by a sizeable proportion as the key to this sentiment, business leaders remain bullish. Almost two-thirds (64%) describe themselves as confident now, with that number rising to 70% in six months’ time.

Trade wars are impacting the growth plans of more than one-third (37%) of business leaders, but also two-thirds (61%) believe Brexit will not have a significant impact. While economic (21% rank this as the top risk), cyber (20%) and technology (16%) are ranked as key risk concerns, corporate (fraud, corruption, poor governance, pension exposure and poor corporate culture), supply chain and regulatory risks are given low priority.

While North American companies report investing in technology in a bid to generate efficiencies, seize competitive advantage and access new customers, they are also cognizant of the inherent risks.

“With companies increasingly dependent on their digital capabilities and connecting a greater number of devices to the internet, scope for disruption from a cyberattack or data breach is rising,” the report said. “Respondents rank cyber risk as the second biggest threat they face today, behind economic risk, but they are aware of the full range of cyber threats that they face, including ransomware, ID theft, security breaches, data loss, regulatory compliance and cloud security.”

Technology (defined as IT system failure, disruption from new tech-enabled competitors or start-ups) ranks third on the risk radar, the highest for any region globally. “Technology is often one of the highest cost items on the balance sheet,” the report said. “Executives are acutely conscious of the downside in making the wrong investment decision, the difficulty of keeping pace with technological change and the dangers inherent in reliance on technology to keep the business efficient, competitive and resilient in the face of rising cyber threats.