Tornado causes damage on Manitoba reserve, but no injuries reported

WAYWAYSEECAPPO FIRST NATION, Man. – There were no reports of injuries but seven homes were damaged on a First Nation when a severe storm hit southern Manitoba on Monday. 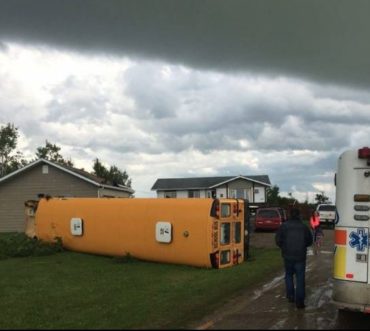 Seven homes were damaged and a school bus tipped over following a severe storm in Manitoba on Monday. Photo: @weathernetwork.

Environment Canada confirmed four tornadoes touched down in the region, including one that hit the Waywayseecappo First Nation in the late afternoon.

Waywayseecappo Chief Murray Clearsky said one of the seven homes was completely destroyed, and about 70 people were forced to seek shelter elsewhere.

The Canadian Red Cross was sending volunteers to nearby Russell, Man., to provide food and housing for those displaced residents.

Environment Canada said the tornado in Waywayseecappo lasted for at least five minutes.

The weather service also said tornadoes also made it to ground near Binscarth, Rossburn and Elphinstone.

“It looks as though one building was destroyed,” said Dan Fulton of Environment Canada. “It tipped over a school bus too.”

“With it a number of strong storms have developed,” he said.

Torneby said tornado warnings had been issued for the region. The storm system also brought strong wind and large hail.

Pics of the tornado that hit WayWaySeeCappo earlier #mbstorm pic.twitter.com/mcUjMbeEIM

Crazy out there for #Waywayseecappo First Nation. From Facebook @CBCManitoba #mb pic.twitter.com/WYMcY55i1s

Tornados that we had here in Waywayseecappo First Nation at supper time Manitoba Canada pic.twitter.com/AgxDVS9s6i