MONTREAL – Environment Canada has confirmed it was indeed a tornado that roared through the Lac-aux-Sables area west of Quebec City on Tuesday, sending camper vans flying, uprooting trees and sending three people to hospital.

Meteorologist Andre Cantin said the team on site Wednesday concluded the area had been hit by an EF1 tornado, which has winds of between 135 and 175 kilometres per hour. 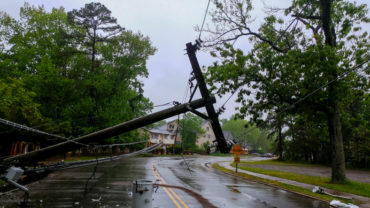 The powerful winds overturned campers, snapped trees, downed power lines and sent objects flying into the nearby lake, which is in the Mauricie region.

Cantin said the destruction was concentrated in a small area – in this case between 200 and 500 metres wide and about a kilometre long – which helped the team make its determination.

“There was a lot of damage,” he said.

Provincial police said the damaged campers were empty, but three people who were eating outside were taken to hospital with minor injuries.

About 50 people made their way to city hall late Tuesday after it was opened for residents waiting to see if it was safe to return to their campers or cottages.

Environment Canada said a storm cell passed through the region at about 7:45 p.m. Tuesday, but no tornado warning was issued.

Meteorological factors contributing to the tornado included high heat and humidity – which cause instability in the atmosphere – and thunderstorms caused by a cold front.

Tuesday’s tornado is the second to hit Quebec in the span of a few weeks.

On July 11, another EF1 twister struck St-Roch-de-l’Achigan, Que., in the Lanaudiere region about 50 kilometres north of Montreal, heavily damaging a campground.

Cantin says Quebec typically experiences six to seven tornadoes annually, but the number can vary greatly from year to year.