Toronto’s mayor says the cost of fixing the damage done to the city’s shorelines and the Toronto Islands by high water levels on Lake Ontario this summer will run to many millions of dollars. 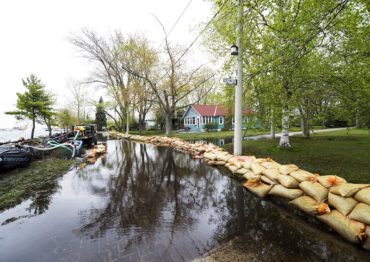 Sand bags keep water from flooding the land more as the Toronto Islands are threatened by rising water levels in Toronto on Friday, May 19, 2017. THE CANADIAN PRESS/Nathan Denette

But John Tory warns the full cost won’t be known until the lake waters fully recede.

A city report released this week said the flood will have cost the city about $4.9 million by the end of July, but Tory says that mostly reflects lost revenues from the island ferries.

Tory says it doesn’t cover the many millions it will cost to repair the damage to shorelines and infrastructure.

He says the water has begun to recede at the beaches in Toronto’s east end, revealing damage along that stretch of shoreline will cost into seven figures to repair.

Tory says the islands are still struggling with high waters and it’s not certain when they will reopen to visitors.

The report estimates the city will lose out on another $2.2 million in ferry revenues if the islands remain closed until the end of August, and says if high ground water lasts into winter, cold temperatures will cause further infrastructure damage.

“We’ll have to watch this thing on a day-by-day basis and see how the weather is,” said Tory.

When the island was closed to visitors in early May, residents described a surreal situation where carp were spawning on the roadways and trees had fallen down because the ground had become too soft to support them.