The Toronto Transit Commission (TTC) is recommending to its board that staff continue to monitor the technological and legislative progress of automated vehicles (AVs) and report back with a recommendation for potential future use of AVs at the transit agency. 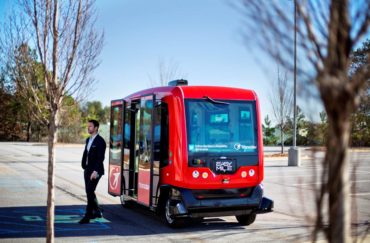 A passenger gets off a driverless shuttle bus on display at the Riverside EpiCenter in Austell, Ga., Thursday, Jan. 26, 2017. The shuttle bus that drove itself, along with human passengers, through a course in a parking lot near Atlanta is embarking on a tour that will include stops in Texas and California. The Alliance for Transportation Innovation offered rides in the 12-person bus. A key goal of Thursday’s demonstration and future ones is to give people a chance to see a driverless vehicle up-close and ride in one, officials said. (AP Photo/David Goldman)

In a staff report earlier this week to the TTC board from the chief executive officer, the TTC acknowledged that while the future of the technology is still uncertain, “it is clear that significant resources are being invested into the industry to achieve widespread adoption.”

The report assessed the impact of Level 3 and Level 4 AVs at the TTC, which would prompt changes throughout the agency, but especially within operational departments. The levels range from 0 (no automation) to 5 (full automation). The report describes Level 3 as conditional automation, whereby it is expected that “the human driver will respond appropriately to a request to intervene” and Level 4 as high automation that covers “all aspects of the dynamic driving task, even if a human driver does not respond appropriately to a request to intervene.”

At its July 12, 2016 meeting, Toronto City Council adopted Item EX16.47, which focused on automated buses operating on public streets. “Staff conducted research on the use of automated vehicles (AVs) in the transit industry and determined that at this time, there are too many unknowns to prepare a business case or a strategic plan with regard to AVs,” the report read. “There is, however, adequate information to identify impacts on departments that would be affected, changes to roles and responsibilities, and positive and negative impacts at a high-level.”

The TTC’s approach was divided into two phases – a literature review on the current state of the industry and a roundtable workshop with staff from various departments to identify potential impacts.

For the impact assessment, numerous TTC departments would be “immediately” affected by the adoption of AVs, including legal, information technology services, finance, bus maintenance and shops, bus transportation, safety and environment, engineering, wheel-trans and strategy and service planning, the report said.

It also found that, if adopted, Level 3 buses would result in, among others: increased workload for the department as a result of any revisions or additions to the Highway Traffic Act; a reduction in claims due to the increased collision prevention capabilities of AVs; “extensive training”; and new policies and procedures related to incidents involving an automated system (for a collision, system failure, etc.).

Level 4 AVs would also require changes to policies and procedures, the report said. For example, if there is forecast for heavy snowfall, procedures must ensure that service is maintained during inclement weather.  There would be further reductions in the rate of collisions and “complete removal of the operator greatly increases the risk of cyberattacks on the vehicles, which could be difficult or impossible to recognize through fleet management.”

A review of the literature found that “optimistic estimates” predict the commercial arrival of AVs as early as 2018, however, a vast majority predict with the range or 2020 to 2025. As for public transit, the majority of larger on-street AVs being developed and tested are shuttles that can hold 10-12 people on average, and operate at speeds of 20 to 25 kilometres per hour. In most instances, there is a requirement for a driver to be present and monitor the system’s performance.

The report concluded that there are numerous challenges to TTC adoption of AV technology for its conventional bus service. “It is imperative for TTC staff to continue to monitor its progress, and assess is a point of maturity has been reached that warrants further study.”