Trade war? There may be insurance for that

As the U.S. Commerce Department contemplates imposing a 25 per cent tariff on all vehicles imported into the United States, including vehicles from Canada, risk managers are starting to contemplate where all of this heightened rhetoric around protectionism may take their companies in the future.

Urs Uhlmann and Dan Riordan of XL Catlin told Canadian Underwriter Thursday that the insurer has been fielding more questions from risk managers wondering how to respond to recent political rhetoric around increased protectionism, trade barriers and tariffs. Specifically, risk managers are starting to look at risk mitigation techniques and insurance coverage available to respond to threats that a global trade war could cause to their supply chains. 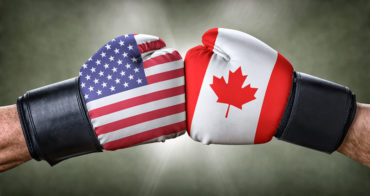 Uhlmann, XL Catlin’s CEO and country manager, will be speaking about the risk of protectionism as a panelist at the 2018 RIMS Canada Conference, to be held in St. John’s, N.L. on September 23-26, 2018.

Uhlmann noted good risk managers will need to identify specific risks associated with escalating trade barriers. No one, for example, would be able to take evasive action or buy general insurance coverage for “protectionism.”

Risk managers can do this by using existing tools – which may include a robust Enterprise Risk Management (ERM) program – and applying them to mitigate trade risk. For example, risk managers have already started to look at things like building redundancy into their supply chains and strengthening resiliency within their organizations.

Today’s contemporary “noise” around tariffs and trade barriers is a relative blip compared to the historical backdrop of three or four decades of trade barriers being removed, as Uhlmann notes. More than 420 regional trade agreements are in force around the world, according to the World Trade Organization, although not all are free trade agreements (FTAs).

Open political sparring over trade recently has captured the attention of risk managers in Canada and elsewhere. The outcome of negotiations around the Free Trade Agreement between the United States, Canada and Mexico remains uncertain, and U.S. President Donald Trump has already made good on earlier threats to impose trade tariffs on steel and aluminum.

“[Protectionism risk] could simply be that some supplier in some place is not viable anymore from an economic perspective, and whether you bought the insurance coverage for [that risk] before or not, you probably would have to have alternate sources anyway,” he said. “Maybe you already have alternate sources based on prior assessments of your supply chain, not even thinking of the aspect of tariffs or other trade barriers that all of a sudden may appear on the horizon.”

Riordan, president of political risk at XL Catlin, said insurance coverage is available that addresses political risk associated with any threat of an escalating trade war.

“If the threat is in the form of an action or egregious action, one that is designed to deny a certain class of investors, or nationality of investors, then that could rise to the level of expropriation or nationalization,” Riordan said. “There is coverage in the political risk insurance market for that.”

And if the situation unfolds slowly, as opposed to there being an example of outright expropriation or nationalization? There may be a situation in which a series of actions is taken against companies from a certain nation, or a certain class of investors, Riordan observes.