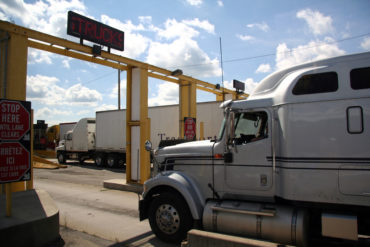 The CTA said in a press release on Wednesday that the objective of the rule, published earlier this month in Canada Gazette, Part II, is to reduce the occurrence of rollover and loss-of-control crashes by introducing a new safety standard that mandates ESC systems on truck tractors and buses with a gross vehicle weight rating greater than 11,793 kilograms (26,000 lbs).

These requirements are aligned with those of the United States. In June 2015, the U.S. National Highway Traffic Safety Administration published a final rule introducing a new safety standard on ESC systems for heavy vehicles.

In Canada, the Regulations Amending the Motor Vehicle Safety Regulations (Electronic Stability Control Systems for Heavy Vehicles) amend the Motor Vehicle Safety Act. The ESC requirements will be phased in for heavy trucks, starting first with three axle truck tractors, effective Aug. 1 for vehicles manufactured in the U.S. and effective Dec. 14 for tractors in Canada, the release said. All remaining tractor types manufactured after Aug. 1, 2019 must come equipped with ESC. Vehicles manufactured prior to the coming-into-force data need not be equipped with ESC.

According to a regulatory impact analysis statement published in the Canada Gazette, Part II, rollover and loss-of-control crashes involving heavy vehicles are a serious safety issue. In Canada, from 2005 to 2012, there was an annual estimated average of 2,810 truck tractor collisions that included a rollover or loss-of-control event, 819 of which caused injury and 70 of which caused fatalities. “Requiring ESC systems will help reduce the occurrence of rollovers and assist the driver in maintaining directional control of the vehicle during, for example, emergency manoeuvres (swerving or braking to avoid an obstacle) or cornering on slippery surfaces,” the statement suggested.

The CTA’s Geoff Wood, vice president of operations and safety, said in the release that “roll stability systems help protect against loss of control accidents by automatically intervening by reducing engine torque and engaging the engine retarder, while automatically applying drive axle and trailer brakes. The activation takes place before the driver is aware of the need.”