Commercial aviation firms are at increased risk if they do not have a “clearly defined go-around policy” during approach and landing, the Transportation Safety Board of Canada suggested in a report released Thursday, the same day the agency announced a runway incursion at Toronto International. 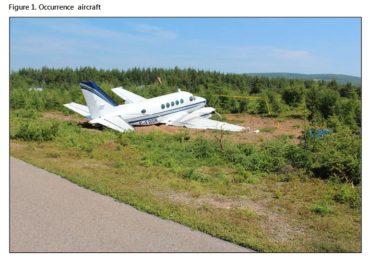 On Aug. 15, 2015, a twin-engine turboprop Beechcraft King Air A100 was badly damaged after a hard landing at Margaree Aerodrome, Nova Scotia. In its investigation report, TSB identified ten findings as to risk.

“If organizations do not have a clearly defined go-around policy, then there is a risk that flight crews will continue an unstable approach, increasing the risk of an approach-and-landing accident,” TSB said in the report.

The King Air was operated by Maritime Air Charter. Two passengers and two pilots were on board at the time.

The were flying from Halifax to Margaree Aerodrome, which has a single 2,500-foot runway. About 30 seconds before landing, the airplane’s airspeed was below the planned speed and the crew increased the air speed by pitching the aircraft down. The airplane’s terrain awareness and warning system then generated automated calls of “sink rate,” “pull up pull up” and “500,” TSB said in the report.

“Neither pilot had considered that landing on a short runway at an unfamiliar aerodrome with known high terrain nearby and joining the circuit directly on a left base were hazards that may create additional risks, all of which would increase the crew’s workload,” TSB said in the report.

“The crew did not recognize the aircraft’s steep rate of descent as being indicative of an unstable approach condition,” TSB said in its investigation report. “The aircraft crossed the runway threshold with insufficient energy to reduce the rate of descent immediately before touchdown, resulting in the hard landing.”

At the time, Maritime Air Charter’s standard operating procedures did not “contain information related to potential threats associated with unstable approaches,” TSB said in its report, “nor do they identify a requirement for crews to discuss a touchdown point on the runway.”

Since the incident, Maritime Air Charter has placed more “emphasis on stabilized approach criteria and controlled flight into terrain avoidance” in its training program, TSB said.

“When continued to a landing, unstable approaches are known to increase the likelihood of a landing accident,” TSB stated in October, 2016.

In 2014, TSB recommended that Transport Canada require “Subpart 705 operators to monitor and reduce the incidence of unstable approaches that continue to a landing.”

As of March, 2016, TSB assessed Transport Canada’s response as “satisfactory in part.”

TSB made that recommendation when it released a report on an August, 2011 accident at Resolute Bay, Nunavut that killed 12. A Boeing 737 struck a hill during approach to Resolute Bay. Three surviving passengers were rescued by Canadian Forces members participating in a training exercises in the area.

In addition to unstable approaches, two other issues made TSB’s watch list for aviation in 2016. They were runway overuns and the risk of collisions on runways.

TSB reported April 20, 2017 it is sending “a team of investigators to Toronto Pearson International Airport following a runway incursion.”

In 2001, a Boeing 767 nearly hit an Airbus 310 that was being towed across an active runway at Toronto International.

TSB said in a report on that incident that a ground controller “issued authorization” to the driver of the truck towing that Airbus, “that implicitly included clearance across Runway 15L,” TSB said in the report.

The tow truck driver “did not perceive” the 767 on the runway “to be in motion until he was fully onto the runway and in a position where he had no alternative but to continue to cross in order to vacate the runway as quickly as possible,” TSB said in the report.

When the 767 crew saw the Airbus being towed across the runway they rejected the take-off, but had reached a speed “in excess of 90 knots” and was still doing 40 knots when the tractor and Airbus cleared the runway.

An air traffic control instructor saw the tractor towing the Airbus but “assumed that it would hold short” of the runway instead of crossing, TSB said in its report.

South of the border, a worker at a South Dakota airport was killed in 1983 after the snow sweeper vehicle he was driving was hit by a DC-9 that was landing.

Six years earlier, 582 people were killed at the Canary Islands’ Tenerife Airport after two Boeing 747s collided on a runway.