Tropical Storm Risk (TSR), which is part of Aon Benfield Research’s academic and industry collaboration, is forecasting 17 named storms, nine hurricanes and four major (Category 3+) hurricanes between the months of June and November. 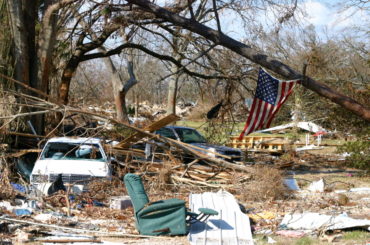 TSR  issued its May forecast for the 2016 Atlantic Hurricane Season on May 28. TSR noted in a release that the forecast from Professor Mark Saunders and Dr. Adam Lea “is a notable increase from their previous projection.” The projected activity is expected to be 30% above the long-range norm since 1950 and 40% below the recent 2006-2015 norm. The agency also noted that there is “an 80% chance that this will be the most active Atlantic hurricane season since 2012.”

The forecast report specifies two primary factors as to why an uptick in the hurricane season forecast has occurred. The main reason is that the North Atlantic Oscillation, which tends to favour warmer sea surface temperatures during the peak development months in August and September, has trended negative in recent months, the release noted. In addition, there is also increasing confidence in the likelihood that La Niña will develop during this time as well.

“This would favour lower trade winds, increased vorticity (spin/rotation) and lower vertical wind shear in the main development regions (MDR),” the release noted. “At present, current forecasts for trade winds in the MDR are weaker than normal, while slightly warmer than normal sea surface temperatures are anticipated. Both would favour increased cyclogenesis. However, TSR is quick to remind that forecast skills for these predictors at such a long lead time are just 43 and 47%, respectively.”

Drs. Saunders and Lea currently project that there is a 57% probability that the 2016 Atlantic Hurricane Season Accumulated Cyclone Energy Index will be above-average, a 33% likelihood it will be near-normal, and a 10% chance it will be below-normal.

The next forecast is expected in late July or early August. 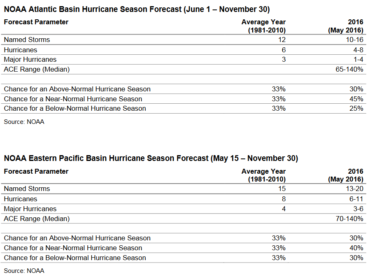 Meanwhile, the National Oceanic and Atmospheric Administration (NOAA) has issued its forecast for the 2016 Atlantic and Pacific Hurricane seasons. Forecasters within the U.S. governmental agency are forecasting 10-16 named storms, 4-8 hurricanes and 1-4 major (Category 3+) hurricane(s) between the months of June and November for the Atlantic Basin. This includes January’s Hurricane Alex.

“NOAA’s report indicates that a near-normal Atlantic Hurricane Season is anticipated in 2016, primarily based on predictions of the main climate factors known to influence seasonal Atlantic hurricane activity, along with model predictions of regional and global atmospheric and oceanic conditions,” NOAA said in a statement. “However, there is a greater-than-normal level of uncertainty at this time. Much of the uncertainty surrounds the Atlantic Multi-Decadal Oscillation (AMO), which is the backdrop that other climate phenomena such as El Niño and La Niña overlay.”