The Transportation Safety Board of Canada said Thursday it is recommending that stall warning systems be mandated for all de Havilland DHC-2 single-engine Beaver airplanes, a recommendation the Federal Aviation Administration made in 2008 after six tourists died in a floatplane accident in Alaska. 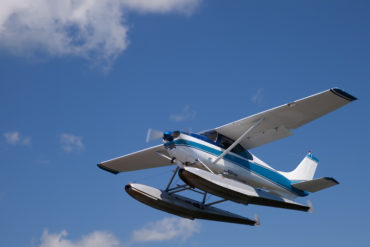 TSB – a separate organization from Transport Canada – released Thursday an investigation report into a fatal accident involving a DHC-2 on Aug. 23, 2015 on a sightseeing flight near Tadoussac, Quebec.

A commercial operator was using a DHC-2 Beaver – made by de Havilland Aircraft of Canada Ltd. in 1956 – to fly over the Saguenay–St. Lawrence whale‑watching park “and then over the mouth of the Fjord du Saguenay before turning inland to allow tourists to observe the region’s topography, flora, and, occasionally, wildlife,” TSB reported.

It flew over hills at about 100 feet above ground level when the pilot “initiated a steep left turn,” TSB said, adding the airplane stalled and entered an incipient spin, colliding with the ground at about 11:27 a.m. The airplane was not high enough to allow the pilot to regain control, TSB said in the report. All six people on board were killed.

“A stall warning system that emits a visual and aural alarm is available for the DHC-2,” but was not installed in the plane that crashed in August, 2015, TSB reported.

“An incipient spin occurs when an aircraft stalls and one wing produces more lift than the other,” TSB noted. “Because the descending wing is at a greater angle of attack, it stalls even further and has more drag, which triggers an autorotation. During this phase of the incipient spin, the flight path changes from horizontal to vertical.”

On Aug. 16, 2007, a float-equipped DHC-2 was destroyed when it collided with the ground about 20 miles north of Ketchikan, Alaska, FAA said in a report, adding that of nine people aboard, five passengers died at the scene and a sixth passenger died two days later.

TSB is “calling on Transport Canada to require that all commercially operated Beavers be equipped with a stall warning system to alert pilots before their aircraft stalls,” TSB said in a press release sept. 7. 2017.

During the sightseeing flight in August, 2015 near Tadoussac, “the pilot was obligated to fly over the Saguenay–St. Lawrence Marine Park at no less than 2000 feet above sea level,” TSB said in the report. “Because the terrain elevation under the path that these flights normally follow is at most 1000 feet ASL, the prescribed altitude of 2000 feet ASL ensures a terrain clearance margin of at least 1000 feet ASL, if maintained outside the park boundaries.”

But the Beaver began its last turn at an altitude of 1,120 feet above sea level, or 110 feet above ground, TSB said in the report.

“At the start of the turn, the airspeed of the aircraft increased from 73 mph to 85 mph, as the angle of bank also increased,” TSB said. “The aircraft’s airspeed then gradually slowed to 60 mph, with an angle of bank of approximately 50° in mid-turn.”

TSB is “calling on Transport Canada to require that all commercially operated Beavers be equipped with a stall warning system to alert pilots before their aircraft stalls,” TSB Chair Kathy Fox said in a press release.