The Transportation Safety Board of Canada is reiterating a call it made 14 years ago for the federal government to put standards in place for data recorders in train locomotives. 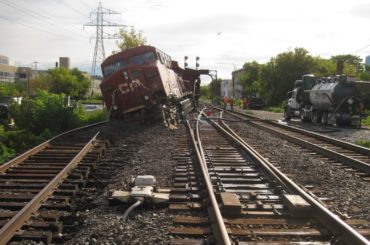 TSB is a separate organization from Transport Canada that investigates incidents in aviation, marine, pipelines and rail. TSB recommended in 2003 that Transport Canada, “in conjunction with the railway industry, establish comprehensive national standards for locomotive data recorders that include a requirement for an on-board cab voice recording interfaced with on-board communications systems.”

The recommendation was made in an investigation report into an incident in January, 1999 near Trenton, Ont, when a passenger train passed a signal indicating the train was supposed to stop.

In the incident in 1999, “there was no derailment, no injuries to passengers or crew, and no damage to property other than to the switch that was forced open by the train wheels as it passed through,” TSB stated.

“Had the locomotive event recorder (LER) in the controlling locomotive cab been equipped with voice recording capability, it may have been possible to determine more definitively the effectiveness of the crew’s communications as they approached the occurrence location,” TSB said in 2003 when it released the report into the 1999 incident, involving a VIA Rail train.

In January, 2016, TSB noted that the Railway Association of Canada (RAC) is proposing that “locomotive voice/video recording devices (LVVR) be used for both post-accident investigation and company-managed prevention monitoring offering great safety benefits.”

But this past September, the Canadian branch of the Washington, D.C.-based International Brotherhood of Teamsters said in a release that railway companies should “not to be given access to the recordings because that would be an unprecedented and unparalleled intrusion into the workplace, one that is unnecessary, and would be tantamount to violating workers’ right to privacy.”

Teamsters Canada agrees that TSB should have access to data from such recorders.

TSB said that its recommendation for national standards for locomotive data recorders is related to a more recent recommendation that Transport Canada “require that all controlling locomotives in main-line operation be equipped with in-cab video cameras.”

In 2013, TSB released a report into a February, 2012 accident northeast of Hamilton that  killed three locomotive engineers.

A VIA train enroute to Toronto from Niagara Falls entered a crossover which had a speed limit of 15 miles per hour. The train was travelling at 67 miles per hour and derailed. The locomotive and the first coach car slid down an embankment. In addition to the three crew members who died, a fourth employee – as well as 44 passengers – were injured. About 4,300 Litres of diesel also spilled.

About 11 seconds before the train derailed, it passed a signal which displayed a “clear to slow” signal, meaning the speed limit is 15 mph. In its investigation report, TSB said the crew “may have … misinterpreted” that the signal displayed the “advance clear to limited” rule.

The absence of voice and video recordings from the cab “left a number of questions unanswered and represents a lost opportunity to mitigate potentially serious crew resource management issues in the industry,” TSB stated. “A number of rail accident investigations in North America have led to findings or other communications identifying human factors as an underlying condition. However, many of these investigations would have further benefitted from additional video recordings captured from the lead locomotive immediately prior to the accident.”

The rail industry “are studying the issue, but their work is not sufficiently advanced to indicate if or when additional physical safety defences will be implemented,” TSB said at the time. TSB includes on its watch list safety issues that it says “need to be addressed.”