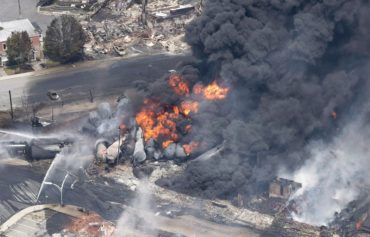 Smoke rises from railway cars that were carrying crude oil after derailing in downtown Lac-Megantic, Que., on July 6, 2013. The dangers of transporting hazardous goods by train were highlighted in tragic fashion four years ago, when an oil-laden runaway train derailed and crashed in the centre of Lac-Megantic, Que., killing 47 people. THE CANADIAN PRESS/Paul Chiasson

In August, 2014, TSB recommended that Transport Canada “audit the safety management systems of railways in sufficient depth and frequency to confirm that the required processes are effective and that corrective actions are implemented to improve safety.”

That recommendation came out of a report into the July, 2013 accident – which killed 47 – involving a crude oil tanker freight train in Lac-Mégantic, Quebec.

New safety management system regulations took effect in 2015 and the following year TSB acknowledged “that good progress” had been made on a three-phase transition plan “to help companies be aware of and progressively implement the new requirements of the SMS Regulations.”

But TSB noted July 11, 2017 in a tweet that the 2014 recommendation “is still active,” meaning that the residual risk from the concern “is sufficient to warrant continued TSB involvement.”

On July 5, 2013, a train with 72 tanker cars with crude oil was stopped for the night near Nantes, nearly 200 kilometres south of Quebec City. The train was operated by Montreal, Maine and Atlantic (MMA) Railway. About 1 a.m., the train started to move downhill, picked up speed and 63 tanker cars derailed in Lac-Mégantic. Property damage included destruction of 40 buildings and 53 vehicles. About 6 million litres of oil spilled, contaminating about 31 hectares of land and resulting in about 100,000 litres of oil spilling into the nearby lake and river.

TSB made 40 findings in its investigation report.

“If Transport Canada does not audit the safety management systems of railways in sufficient depth and frequency and confirm that corrective actions are effectively implemented, there is an increased risk that railways will not effectively manage safety,” TSB said at the time.

“The limited number and scope of safety management system audits that were conducted by Transport Canada Quebec Region, and the absence of a follow-up procedure to ensure Montreal, Maine & Atlantic Railway’s corrective action plans had been implemented, contributed to the systemic weaknesses in Montreal, Maine & Atlantic Railway’s safety management system remaining unaddressed.”

MMA “had what one might call a less than ideal safety culture,” said Don Mustard, senior investigator for rail and pipelines at TSB, during a presentation in Toronto two years after the Lac-Mégantic tragedy. “They weren’t exactly leaders in that area.”

“The company never assessed the risks of leaving a train carrying crude oil unattended, on a downhill grade, with no other precautions taken to prevent the train from running uncontrolled, other than the assumed correct application of the handbrakes,” Mustard said at AIEC.

TSB assesses Transport Canada’s response as having ‘satisfactory intent,” meaning that Transport Canada’s “planned action, when fully implemented, will substantially reduce or eliminate the safety deficiency,” but that the proposed action “has not been sufficiently advanced to reduce the risks to transportation safety.”

Safety management and oversight is one of ten issues on TSB’s most recent watch list, released Oct. 31, 2016.

All pipeline and railway companies must have safety management systems but TSB says it has observed “a failure to identify companies’ ineffective processes and to intervene when necessary.”

Many marine and aviation firms are not even required to have SMSs, TSB stated on its watch list page.

“Some companies consider safety to be adequate as long as they are in compliance with regulatory requirements, but regulations alone cannot foresee all risks unique to a particular operation,” TSB said on its watch list page. “That is why the Transportation Safety Board of Canada (TSB) has repeatedly emphasized the advantages of safety management systems (SMS), an internationally recognized framework to allow companies to effectively manage risk and make operations safer.”