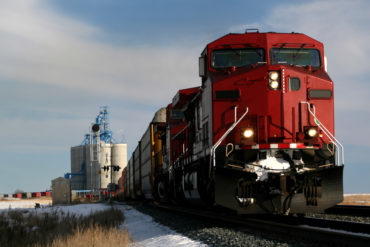 “On-board voice and video recorders on locomotives would help advance railway safety,” TSB stated in a tweet, reiterating an issue released on its “watch list.” That watch list, released Oct. 31, is one of key safety issues that TSB says “need to be addressed.”

Two other rail items on the watch list are following railway signal indications and transportation of flammable liquids, which TSB identified as a major issue after the 2013 Lac-Megantic tragedy.

In 2003, TSB recommended that Transport Canada, “in conjunction with the railway industry, establish comprehensive national standards for locomotive data recorders that include a requirement for an on-board cab voice recording interfaced with on-board communications systems.”

Such recorders “would allow the Transportation Safety Board of Canada (TSB) to confirm the nature of crew communications and the dynamics of crew actions and interactions,” TSB states on its website.

In a reassessment of that recommendation released in March, 2016, TSB noted that national passenger operator VIA Rail Inc. and Toronto area commuter train operator GO Transit have started installing recorders on their trains.

“While Transport Canada is promoting voluntary installation of locomotive voice and video recorders (LVVR) as a tool to monitor railway operations in a non-punitive manner, the railways wish to use this technology to monitor employee compliance with rules and to take corrective measures,” TSB noted in a reassessment in March, 2014.

“The railways may not agree to the expense of this technology if there are any restrictions on its use. The railways also have challenges with acceptance of this technology by their employees. TC has facilitated bringing the LVVR issue to the forefront with all stakeholders. There has been moderate success with the passenger service railways.”

The recommendation was first made in 2003, when TSB released a report on an incident involving a VIA rail train in January, 1999. The train passed a signal near Trenton, Ont. while it was indicating stop. There were no injuries in that incident.

TSB reiterated that recommendation 10 years later, in a report on a fatal accident northeast of Hamilton. In February, 2012, a VIA passenger train, travelling at 67 miles per hour, entered a crossover that had a speed limit of 15 miles per hour. As a result, both the locomotive and first coach car derailed and slid down on an embankment. All three operating crew members were killed after the locomotive cab roof area was crushed after it rolled over and struck a building foundation. Several others were injured.

The crew of that train “may have … misinterpreted” that the signal displayed the “advance clear to limited” rule, TSB said in its report, adding and that the crew “was likely focussed on resolving the apparent track occupancy conflict of the signals work crew working ahead … rather than properly identifying the indication of the signal.”

But without in-cab voice recordings, “it is impossible to identify the precise cause with certainty,” the report noted.

Another issue on the watch list is crew fatigue management systems.

“Fatigue has been a factor in numerous railway investigations, most notably regarding freight train operations,” TSB chair Kathy Fox stated in a press release, issued Oct. 31, announcing the new watch list. “Too many train crews aren’t getting the rest they need, whether its shifts that are too long or irregular scheduling that interferes with normal sleep times. It’s time for the railway industry to start applying fatigue science to crew scheduling, instead of calling for more studies.”

Crew fatigue was found by TSB as a contributing factor in a 2014 accident east of Prince Rupert, B.C., when one locomotive and eight intermodal flat cars, on a Canadian National Railway freight train, derailed.