The frequency of fatal accidents involving Canadian fishing vessels is too high and crew members will continue to be at risk until “the complex relationship and interdependency among safety issues is recognized and addressed,” the Transportation Safety Board of Canada said in a recent report into the death of a fishing vessel operator in 2016 off the coast of Prince Edward Island. 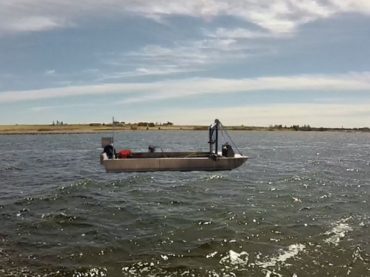 The operator and part owner of a shellfish company was working on the 8.5-metres unregistered barge when he was fatally injured. Photo: Transportation Safety Board of Canada.

On April 29, an operator and part-owner of a shellfish company was killed while working on an 8.5-metre unregistered aluminum barge, which was fitted with a crane used to lift oyster storage containers out of the water.

The operator was working directly underneath the crane untangling lines, about a nautical mile east of Milligan’s Wharf, P.E.I. The boom from the crane fell and landed on the operator’s head. In a report released Aug. 9, 2017, TSB investigators concluded that a piston rod on the crane had fractured.

Neither the operator nor the second crew member – a deckhand – were wearing a hard hat.

“The crane was capable of lifting oyster storage containers weighing between 500 and 1000 kg, as well as performing maintenance operations on oyster-growing equipment,” TSB said. “It was a hydraulically powered knuckle boom–type crane with an articulated arm.”

TSB – a separate organization from Transport Canada that investigations incidents in rail, pipelines, aviation and marine – made six findings as to causes and contributing factors in the Milligan’s Wharf accident.

“The design of the crane was flawed: there was insufficient space between the hydraulic cylinder’s attachment points to allow for the full extension of the piston rod when the crane boom was fully raised,” TSB said in the report.

The piston rod, TSB added, “was forced to bend” and after having bent several times, the material in the rod could no longer sustain the bending stress.

“If fishing vessel operations do not have an adequate system for on-board risk management, there is a risk that crew may be exposed to unsafe conditions, such as working underneath a crane boom without personal protective equipment,” TSB said in a report.

Commercial fishing safety is one of 10 issues on TSB’s most recent watchlist, released Oct. 31, 2016.

“Even though the numbers of registered fishermen and active fishing vessels have declined overall since 2006, the average number of fatalities has remained constant at 10 per year,” TSB says on its watchlist web page. The watchlist is comprised of “key safety issues” that TSB says need to be addressed.

“The safety of fishermen will be compromised until the complex relationship and interdependency among safety issues is recognized and addressed by the fishing community,” TSB said in its report on the tragedy near Milligan’s Wharf in 2016.

The barge with the crane “was not inspected, certified, or registered with Transport Canada,” TSB said in the report.

Of the 10 issues on the watchlist, commercial fishing safety is the one that applies to marine. Of the others, four apply to railways, three to aviation and none to pipelines. Two are multimodal and one of those is safety management oversight.

“Recent investigations have found companies that have not managed their safety risks effectively, either because they were not required to have [a safety management system] or because their SMS was not implemented effectively,” TSB says on its watch list page.

TSB has been urging the federal government to require all commercial operators in the air and marine industries to have formal safety management processes and effectively oversees these processes.

In 2004, TSB recommended Transport Canada “take steps to ensure that small passenger vessel enterprises have a safety management system,” in a report on a 2002 accident in which four passengers died on the Lady Duck, an amphibious sightseeing vehicle that sank in the Ottawa River. The driver of the Lady Duck noticed the vessel was floating lower than normal near Hull, Que., and although all aboard were ordered to abandon ship, the four people who drowned had become trapped under a fabric awning.

In its annual report to Parliament, released July 20, 2017, TSB said there has “been only limited progress” on expanding the application of safety management systems “to a broader range of companies.”