A May, 2016 collision between two logging tugs near Nanaimo, British Columbia demonstrates that some marine firms are “not effectively managing their safety risks,” the Transportation Safety Board of Canada said in a report released Thursday. 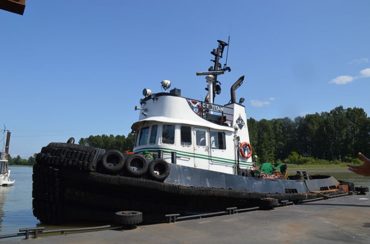 The Tug C.T. Titan. Credit: Transportation Safety Board of Canada.

On May 24, 2016, the C.T. Titan and Albern were assigned to log yarding operations at Gabriola Bluffs, off the east coast of Vancouver Island. Shortly before 5:30 p.m. local time, the Albern left the yard. The C.T. Titan left the yard about a minute later.

C.T. Titan‘s bow struck the Albern‘s starboard quarter. The Albern capsized and initially trapped its two crew members, who managed to escape swim to the surface and were rescued.

Both were tugs owned by Jones Marine Group Ltd.

The Albern sank and was a “constructive total loss.” It has been carrying 800 litres of fuel oil and 200 litres of hydraulic oil.

Neither the C.T. Titan nor the Albern had safety management systems and were not required by law to have them, reported TSB, a separate organization from Transport Canada that investigates incidents involving railways, pipelines, aviation and marine.

Some elements of an effective SMS include documentation and record-keeping procedures, procedures for identifying hazards and managing risks and emergency procedures, TSB noted in the report.

The C.T. Titan’s safety manual included a procedure on ship berthing but there were “no documented safe operating procedures for other common aspects of the vessel’s operations, such as the transfer of propulsion control and autopilot/jog steering operations,” TSB said in its report.

TSB made a total of 13 findings.

“If companies do not have a process for managing vessel safety, including the development of safe operating procedures for routine operations, there is a risk that deficiencies in vessel equipment and practices may go unidentified or unaddressed, compromising the safety of the vessel and its crew,” TSB said in its investigation report.

Safety management and oversight is one of 10 issues on TSB’s watchlist, released Oct. 31, 2016.

“As this occurrence demonstrates, some transportation companies are not effectively managing their safety risks,” TSB said in its report on the collision, adding that oversight and intervention on the part of Transport Canada has “not always proven effective at changing companies’ unsafe operating practices.”

The issue of SMS will remain on TSB’s watchlist until the federal government “implements regulations requiring all commercial operators in the air and marine industries to have formal safety management processes and effectively oversees these processes,” TSB says on its watchlist page.

“Numerous recent investigations have found companies that have not managed their safety risks, either because they were not required to have an SMS or because their SMS was not implemented effectively,” TSB said in its annual report to parliament, released July 20.

TSB notes that many companies in both the air and marine industries are not required to have formal safety management processes.

The Leviathan II whale watching vessel – which capsized Oct. 27, 2015 near Tofino, B.C. with 27 aboard – did not operate under a certified safety management system, nor was it required to by regulation, TSB reported in a report released in June, 2017.

“As the vessel was about to leave the area, a large breaking wave approached and impacted the vessel on the starboard quarter,” TSB said in the report released this past June. “The vessel broached and rapidly capsized, throwing all 24 passengers and 3 crew into the cold seawater without flotation aids.”

TSB said in its report that the rapid capsizing “resulted in the passengers and crew falling into the cold sea water without flotation aids or thermal protection, exposing them to the effects of cold water immersion.”

Another vessel that was not required by regulation to have an SMS was the Lady Duck, an amphibious vehicle that was used for sightseeing tours in the Ottawa area. Four passengers drowned June 23, 2002 when the Lady Duck sank near the Hull, Quebec marina.