Earthquakes are estimated to cost the United States US$6.1 billion annually in building stock losses, according to an updated report published last week by the Federal Emergency Management Agency (FEMA). 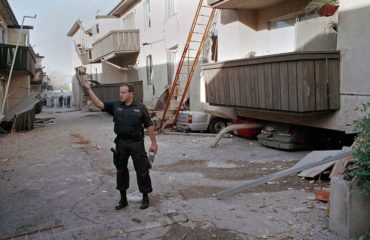 FILE – In this Jan. 17, 1994 file photo, a Los Angeles police officer stands in front of the Northridge Meadows Apartment building, after the upper floors of the structure collapsed onto the open garages and first story, killing 16 people in Los Angeles. A report Tuesday, March 10, 2015, by the U.S. Geological Survey found that the odds of a magnitude-6.7 quake similar in size to the 1994 Northridge disaster was higher in Northern California than Southern California — 95 percent versus 93 percent. (AP Photo/Chuck Jackson, File)

The new loss estimate represents a 10% increase over the previous estimate in 2008, but when accounting for inflation changes, there is a net small decrease (when both the 2008 and new report results are adjusted to 2014 dollars), the U.S. Geological Survey (USGS) said in a press release. The changes in loss estimates are mainly due to changes in population and building exposure, estimate of long term earthquake hazard and an improved site soil characterization adopted in the present study, USGS reported. For the report, the USGS’ science on earthquake hazards was a “critical component,” the organization said, noting that it collaborated with FEMA on the report, titled Hazus Estimated Annualized Earthquake Losses for the United States.

In 2014, the USGS released an updated assessment of earthquake hazards and potential ground shaking across the nation, which USGS said in the release “was used as an essential piece to inform the FEMA analysis, which combines that insight with consequences in terms of physical damage and economic loss.” USGS regularly updates national seismic hazard models and maps, typically every six years, in sync with building code updates.

According to the report, recent earthquakes show a pattern of steadily increasing damages and losses primarily due to three factors: (1) significant growth in earthquake-prone urban areas; (2) vulnerability of the older building stock, including poorly engineered non-ductile concrete buildings; and (3) an increased interdependency in terms of supply and demand for the businesses that operate among different parts of the world.

USGS also provided new insight on soil characteristics across the nation to help understand the intensity of ground motion following an earthquake; if a structure is built on soft soil, it is more likely to have stronger shaking compared to harder bedrock. With limited data available, the 2008 FEMA analysis assumed the worst case scenario and considered the nation uniformly as if it was on soft soil. For this new report, the USGS produced preliminary maps to estimate soil classifications in different areas. Further research and testing will allow for more precise maps of soil characteristics, USGS explained in the release. 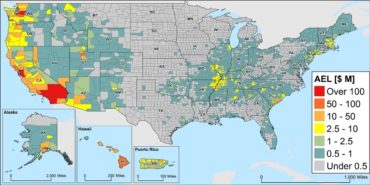 Figure 3-4: This map depicts annualized earthquake loss by county. The estimated losses consider the value of buildings in each specific area. (Public domain.)

The main updates to earthquake hazards since the 2008 FEMA report include the following:

In the United States, earthquake risk continues to grow with increased exposure of population and development. While there is constantly improved understanding of high hazard and risk areas such as Los Angeles, San Francisco and Seattle, there is also high risk of significant damage and loss in regions such as Salt Lake City, St. Louis, Memphis, Charleston, New York City and Boston, even though they have low or moderate earthquake hazards, the release said. This high level of risk reflects dense concentrations of buildings and infrastructure.