A total of 35,092 lost their lives in traffic crashes in 2015, a 7.2% increase in deaths from 2014, according to final data released by the U.S. Department of Transportation’s (DOT) NHTSA. The data showed traffic deaths rising across nearly every segment of the population; the last single-year increase of this magnitude was in 1966, when fatalities rose 8.1% from the previous year.

“Despite decades of safety improvements, far too many people are killed on our nation’s roads every year,” said U.S. Transportation Secretary Anthony Foxx in a press release. “Solving this problem will take teamwork, so we’re issuing a call to action and asking researchers, safety experts, data scientists, and the public to analyze the fatality data and help find ways to prevent these tragedies.”

Ten years ago, the number of traffic deaths was nearly 25% higher, with 42,708 fatalities reported nationwide in 2005. Since then, safety programs have helped lower the number of deaths by increasing seatbelt use and reducing impaired driving. Vehicle improvements, including air bags and electronic stability control, have also contributed to reducing traffic fatalities. But after a decade-long downward trend, traffic deaths in 2015 increased by 2,348, nearly one-third compared to 2014.

In response to the increase, DOT and the White House are issuing an “unprecedented” call to action to involve a wide range of stakeholders in helping determine the causes of the increase. NHTSA will share its Fatality Analysis Reporting System with safety partners, state and local officials, technologists, data scientists and policy experts, and private sector partners using new data collection technologies will be offering access to unprecedented amounts of data and new visualizations tools, the release said. 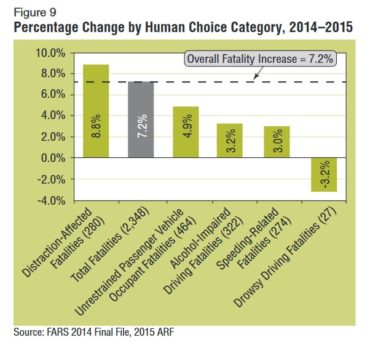 The call to action will explore the following questions:

According to NHTSA, job growth and low fuel prices were two factors that led to increased driving, including increased leisure driving and driving by young people. More driving can contribute to higher fatality rates, the release said, noting that in 2015, vehicle miles traveled increased 3.5% over 2014, the largest increase in nearly 25 years.

Pedestrian and pedalcyclist fatalities also increased to a level not seen in 20 years and motorcyclist deaths increased more than 8%. Human factors continued to contribute to the majority of crashes, and nearly half of the passenger vehicle occupants killed were not wearing seatbelts, NHTSA reported. Almost one in three fatalities involved drunk drivers or speeding and one in 10 fatalities involved distraction.

“The data tell us that people die when they drive drunk, distracted or drowsy, or if they are speeding or unbuckled,” said NHTSA administrator, Dr. Mark Rosekind. “While there have been enormous improvements in many of these areas, we need to find new solutions to end traffic fatalities.”