MARRAKECH, Morocco – Hot and wild and with an “increasingly visible human footprint” – that’s how the U.N. weather agency sums up the global climate in the past five years.

In a report released Tuesday at international climate talks in Morocco, the World Meteorological Organization said 2011-2015 was the hottest five-year period on record.

That comes as no surprise as WMO’s annual reports have showed record average temperatures in 2014 and 2015. But the agency said the five-year report provides a better overview of warming trends and extreme events such as prolonged droughts and recurrent heatwaves.

“We just had the hottest five-year period on record, with 2015 claiming the title of hottest individual year. Even that record is likely to be beaten in 2016,” said WMO Secretary-General Petteri Taalas.

The WMO’s preliminary climate assessment for 2016 is set to be released next week.

While it’s complicated to draw links between single weather events and climate change, the report found that many extreme events during the period were made more likely as a result of man-made climate change. In the case of some extreme high temperatures, the probability increased by a factor of 10 or more, the report said.

“Examples include the record high seasonal and annual temperatures in the United States in 2012 and in Australia in 2013, hot summers in eastern Asia and western Europe in 2013, heatwaves in spring and autumn 2014 in Australia, record annual warmth in Europe in 2014, and a heatwave in Argentina in December 2013,” WMO said. 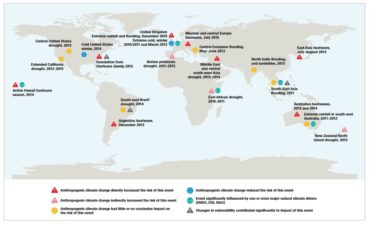 Climate scientists who were not involved with the report said it underscored the need for governments to boost efforts to fight climate change beyond their pledges for last year’s landmark Paris Agreement.

“The evidence is overwhelming,” said Chris Field, director of the Stanford Woods Institute for the Environment. “The new report from WMO is a clarion call for embracing and going beyond the goals of the Paris Agreement.”

“Halting global warming at a manageable level, as the world’s nations decided in the Paris Agreement, is now a race against time,” said Stefan Rahmstorf of the Potsdam Institute in Germany.