Unexpected threats should be a concern to SMEs in U.K.: RSA

More than a quarter of polled small and medium-sized enterprises (SMEs) in the United Kingdom reported being hit with an unexpected £50,000 bill would put them out of business, notes a new report released this week by RSA. 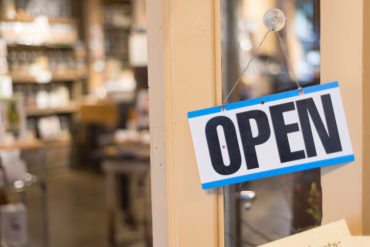 And while the lion’s share of SMEs polled this past September – 73% – recognize there are now risks that did not exist when they opened shop, 82% have not altered or increased their insurance coverage as a result of or in response to technological change such as cyber.

“A cyber attack could easily cost even more than that [£50,000] as the average cost of a cyber security breach to small businesses is between £75,000 and £311,000,” Russell White, schemes and deals director, regions and SME, commercial at RSA, writes in the forward to Future Impacts: the changing nature of risk facing small businesses in the U.K.

“This could have significant implications for the U.K. economy as a whole given the important role SMEs play in the U.K.,” White notes.

The report – based on fieldwork done by Opinium of 1,000 senior decision-makers at U.K. SMEs and broker fieldwork done by Cicero Research involving 84 broker respondents – explores the effects of economic events (including Brexit) on business growth, the risks businesses are facing and how they are managing those risks. 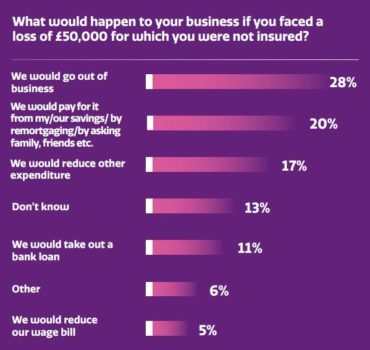 Only 14% of SMEs plan to increase their cover in the next 12 months and 74% said they plan to keep their insurance coverage the same, the report shows. However, 28% of brokers, reported they thought their SME clients would expand their coverage.

“While more traditional risks still hold a fundamental threat to businesses of all sizes, newer and less transparent risks are growing quicker than businesses are protecting themselves against them,” the report points out.

Many businesses “are putting themselves in a precarious position by not having anything to fall back on if they are hit with unexpected costs,” White says.

“Although not all risks are directly insurable, there are policies that businesses can take out that would alleviate the impact these risks could have, such as, for example, business continuity insurance which could cover loss of income in the event of a significant incident affecting their property,” he continues.

The report shows that SMEs have identified a range of more significant threats that many companies are not sufficiently protected against. In fact, 58% of respondents are not insured against any of their top three risks: economic uncertainty (35%); increasing market competition (35%); and cash flow (31%).

“There are a range of risks that appear to have fallen under their radar,” White cautions. “Our research shows a significant disparity between the issues perceived by U.K. businesses to be a risk and the extent to which they are protecting themselves against them,” he points out.

“Whether by choice or due to lack of awareness, SMEs are essentially self-insuring against some major risks,” states the report.

In all, 43% of businesses have not reviewed their business insurance for over a year, it notes, “which suggests that business owners are not putting sufficient time into understanding their risks and what they can do about them to protect their future.”

One in five respondents “admitted that they did not know what types of insurance cover exist for their needs. This lack of awareness is a major challenge for the insurance industry and brokers of small businesses across the U.K.,” it points out.

“Almost nine in 10 (88%) insurance brokers see underinsurance as a problem for their SME clients, showing that businesses which do have insurance in place are at risk as well due to their coverage potentially not being sufficient enough to cover the full cost of repairing the damage caused by unexpected issues,” RSA reports.

“Businesses’ lack of awareness of emerging risks and the fact that only 14% of SMEs plan to increase their cover in the next 12 months suggests the scale of underinsurance amongst U.K. businesses is likely to worsen in the coming years unless significant action is taken,” White warns.

Cyber attacks are one such example of the disparity between perceived risk and protection among SMEs, the insurer suggests.

With regard to cyber crime, 41% of brokers compared to 14% of small businesses placed it as a top three risk, the report states.

Government figures show that about two-thirds of large businesses and three-quarters of SMEs had experienced some form of cyber attack, but just a third of firms had formal written cyber security policies and only 10% had an incident management plan in place.

RSA’s own research indicates that a mere 9% of businesses have cyber cover in place, and only 26% say they are concerned about the threat posed by a cyber attack.

Seven in 10 SMEs taking part in the poll further reported they do not regard Brexit as a threat, RSA reports. Specifically, 43% of respondents noted that Brexit will either have no impact at all for business, while 27% said it will be positive.

“Less than a quarter of SMEs (23%) said it would have a negative impact on their own growth and less than one-in-five (17%) ranked Brexit as one of the top three risks to their growth in the next 12 months,” the report states.

Of the 18 sectors surveyed, eight were net positive about the impact of Brexit, eight were net negative, and two were evenly split. Notably, manufacturing (45%) and IT (43%) were significantly more positive than the norm (27%), the report adds.

“The onus is not only on SMEs themselves to better manage their risks, but also on brokers and insurance providers to proactively raise awareness of the protection gap,” White emphasizes.

Pointing out that a lack of awareness of what insurance options are available to SMEs is a stumbling block, “it is important that business owners accurately understand their risks, as well as what can (and cannot) be insured against, so they can take appropriate steps to ensure their growth ambitions are realized,” he points out in the report.

“Taking on an element of risk is a necessary part of driving growth for any small business. Risk can bring opportunities, but it is crucial that growing businesses manage their risk effectively so they can thrive in what is a challenging economic climate,” White adds.