DELTA, B.C. – Weather is not considered a factor in the cause of a wildfire at a unique peat bog in Delta, B.C., as crews contained about 60% of the blaze on Tuesday, the fire chief says.

Dan Copeland said investigators arrived on the scene of the 78-hectare fire in Burns Bog on Tuesday morning but it could be several weeks before its cause can be determined.

A light drizzle was helping firefighters on Tuesday as they worked to fully contain the blaze, which started Sunday, by the end of the day, he said. 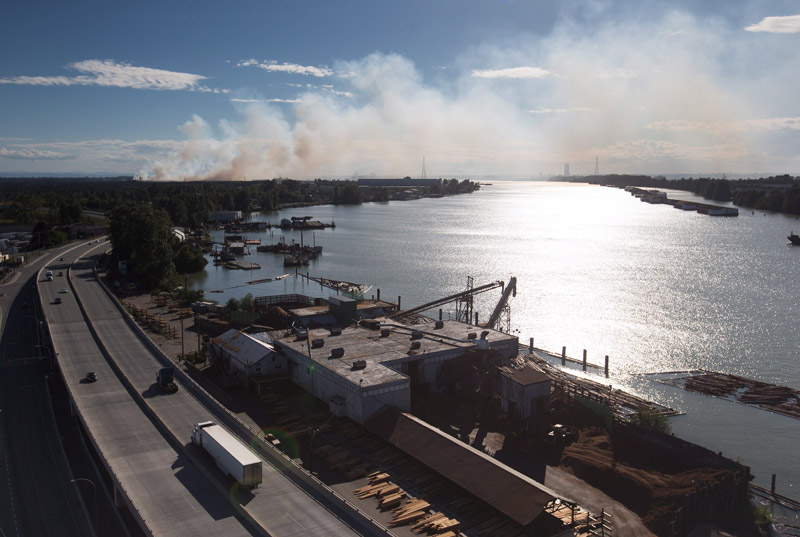 Smoke rises from a fire burning at Burns Bog in Delta, B.C., on Sunday, July 3, 2016. THE CANADIAN PRESS/Darryl Dyck

Highway 17, a major thoroughfare in the community south of Vancouver, is expected to reopen by Friday. An evacuation order affecting about a dozen businesses at the Tilbury Industrial Park was lifted Tuesday.

Mayor Lois Jackson said it was a “scary moment” when the fire jumped the highway into the industrial area, which includes a forest products company and a chemicals business.

“We didn’t really say that in the beginning because I didn’t think it would be a positive thing to do,” Jackson said. “But that industrial area is full of many things and we were very concerned at the time that that was happening.”

She said the fire burned an area where containers were stored but crews were able to save businesses.

Delta remains under a state of local emergency so first responders can get access to private land, Jackson said.

After #BurnsBogFire has been contained, @MayorOfDelta will ask scientific advisory panel for guidance on recovery. https://t.co/0gpwJ0nVTB

She said Burns Bog was taken over as a conservation area between 2001 and 2004 by the municipality, the province, the federal government and Metro Vancouver, a regional government made up of local mayors. Delta is responsible for fire and maintaining the water table at the bog, Jackson said.

“The one thing we do not want to happen is have people in the bog,” she said. “Usually where people go, you can find fire. It is a place for creatures and flora and fauna, but it’s not a place for people.”

Most of Burns Bog is closed to the public, but an area of about 60 hectares called the Delta Nature Reserve is open for viewing.

Delta plans to consult with Metro Vancouver’s Burns Bog scientific advisory panel for guidance in the recovery of the nature reserve, Jackson said.

Eliza Olson, founder of the Burns Bog Conservation Society, has said about 90 per cent of the peat bog is expected to regenerate in the coming years, but it could take a century before the entire area recovers.

Olson estimated the 30-square-kilometre nature reserve, which is a migratory route for a variety of birds, is believed to be the largest undeveloped urban wilderness area in North America.

The bog’s acidic, peat-forming ecosystem includes rare plants, such as cloudberries and velvet-leafed blueberries, along with two species of dragonflies among its diverse inspect species, Olson said.

Burns Bog is one of North America’s largest peat bogs and flames can sink under the dry peat, where they burn out of sight.

But fire officials have said ground conditions and a quick response from firefighters kept the flames from burrowing beneath the peat, where the blaze would have the potential to burn for weeks.