Increased use of video-based telematics in the commercial fleet space, as well as the evolution of car subscription services, are just two ways in which the Canadian insurance market could change over the next few years.

Panellists discussed their predictions for the personal and commercial lines markets Friday at the virtual InsurTech North conference, hosted by MSA Research.

Sabina Martin, senior product manager at Oakville, Ont.-based GEOTAB (a commercial fleet telematics company), said she sees video-based telematics “really taking off” in the near future. While telematics devices measure driving behaviours such as speed and hard braking, video can add a whole new dimension to the situation.

“Harsh braking [could] be both a good and bad thing, but video brings the context to which one it is,” Martin said by way of example during the Insuring the Future of Mobility session. For example, video could tell “whether you were swerving to avoid someone who completely cut you off, or [whether] you were [hard braking] because you weren’t paying attention.”

In the commercial lines fleet space, many of GEOTAB’s customers have already invested in video-based telematics, “and if they haven’t, they’re looking to invest,” Martin reported. 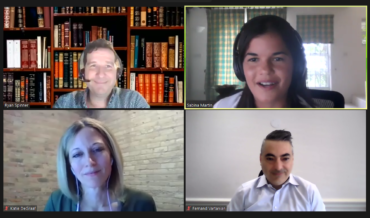 She is also curious to see if the digitization of telematics sales takes off. “We know companies like Volvo are looking to sell their cars only online,” Martin said. “It’ll be interesting to see if that takes off from a telematics perspective. When you go to a dealership, are you…going to be able to use some kind of panel where you can purchase telematics right then and there?”

Fernand Vartanian is general counsel with Onlia, an online direct home and auto insurance company for Ontario consumers. He provided his predictions for the personal lines market over the next two to five years during the webinar.

“Look for a comeback in Ontario of the Driver’s Policy,” Vartanian said, referring to a policy in the 1960s that “basically allows you to have benefits of auto insurance without actually owning a vehicle.”

He also sees car ownership changing, something that the COVID-19 pandemic has really expedited. “People are looking to not necessarily own a vehicle or enter into a long-term lease, so I see subscription services. So, if you subscribe to Netflix…why can’t you subscribe to a vehicle that has zero commitment, other than over 30 days, because of regulations?” Vartanian asked.

Onlia is partnering up with some subscription services for vehicles as well because it has found Millenials and other relatively young drivers want vehicles on a more short-term basis.

Other predictions for the future include: