Earl Ray Tomblin, the Governor of West Virginia, announced on Friday an extraordinary session of the state legislature to address the state’s share of costs associated with flooding in late June of this year. 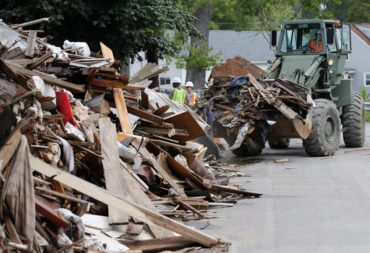 “The June flooding was unprecedented in our state’s history, claiming 23 lives and ravaging our communities,” Gov. Tomblin said in a press release announcing the extraordinary session, held on Sunday night. “More than 1,400 homes and 50 businesses were destroyed, while more than 2,300 homes and nearly 200 businesses sustained serious damage. In addition, damages to public infrastructure will end up totalling hundreds of millions of dollars.”

Gov. Tomblin said that with “such extensive destruction, we have been continually working to identify all costs associated with this disaster. Now that we have a clearer picture of total estimated costs moving forward, we must allocate the funds needed to continue the recovery process. I have met with leadership from both houses and both parties, and I am confident that we can move quickly.”

According to a fact sheet from the governor, the total estimated costs from the flooding, which began on June 23, were nearly US$340 million. At minimum, the Federal Emergency Management Agency (FEMA) covers 75% of the federal/state cost sharing; at maximum, the state would cover 25%, or about US$85 million.

Among other items, the estimated costs include US$130 million for rebuilding five schools, US$32 million for stream clean-up costs and US$37.5 million for mitigation (work to lessen potential for future damages).

“If the state meets FEMA’s designated threshold of US$253 million in disaster-related costs, FEMA could cover 90%, leaving the state responsible for 10%,” the fact sheet said. “If approved by the White House, the 90/10 cost-share would kick in once funds are obligated, including funds for school construction. The state must proceed in allocating funding to cover 25% of total costs – or US$85 million – in order to continue receiving funds from FEMA and to qualify for the 90/10 cost-share.”

On Sept. 14, Gov. Tomblin sent a letter to U.S. President Barack Obama requesting to be included in a congressional disaster relief funding package. The request for US$310 million would be available through Community Development Block Grants for areas including housing, economic development and infrastructure to support long-term, sustainable recovery and economic revitalization.

The letter pointed out that West Virginia “experienced devastating floods across more than 20 per cent of our state’s counties. Four counties were critically impacted and a state of emergency still exists in those counties nearly three months later. This flooding proved to be one of the most deadly, if not the most deadly, natural disaster in the country this year. The velocity and ferocity of the water wiped entire communities off the map, and uprooted and mangled water and wastewater systems, highways and countless other public infrastructure components.”

Gov. Tomblin wrote in the letter that most of the areas devastated by the flood were towns and communities that had been reliant on coal. “That industry’s downturn has left most of them with no capacity to build back on their own. Many of the flood-impacted regions were outside the flood plain and, as a result, most victims were without flood insurance.”

Of the 1,200 businesses registered with FEMA as impacted by the flood, only 145 applied for loans with the Small Business Administration and only 62 have been approved for loans to date. In addition, the letter said, more than 1,400 homes were destroyed and more than 2,300 had substantial damage. “While nearly 1,000 homeowners had some form of flood insurance, it is proving inadequate for many of them. It also appears that most of the flooded homes were outside the identifiable flood plains and were without flood insurance,” the letter said.

“We also understand that we must utilize the funds we receive to minimize the impact of future weather events, regardless of how rare they may be,” Gov. Tomblin wrote. “That is not an insignificant challenge in the mountains and valleys of Southern West Virginia. It will require us to modify habits and habitats that often extend generations in the region of the state.”