If you take a deep dive into the real cost to Canadians of insured major natural disasters, even though the methodology changed around 2008, it still shows a long-term trend of claims cost increases over nearly 40 years, industry experts tell Canadian Underwriter.

Insurance Bureau of Canada provided data on what it calls “Natural disasters — major multiple-payment occurrences” for every year, from 1983 through 2019, to Canadian Underwriter. Those losses (not including adjustment expenses) were $38.4 million in 1983 and $39.1 million in 1984. In 2018 and 2019 the figures were $2 billion and $1.37 billion respectively.

Don Forgeron, IBC’s chief executive officer, alluded to those numbers during the recent CatIQ Connects virtual conference. The Canadian property and casualty insurance industry was averaging about $400 million a year in insured cat losses from 1983 through 2008, Forgeron said at the time. Since 2009, the annual average has been nearly $2 billion.

To look at IBC’s numbers in the context of inflation and population change, Canadian Underwriter obtained consumer price index and census figures from Statistics Canada and adjusted those numbers for inflation. 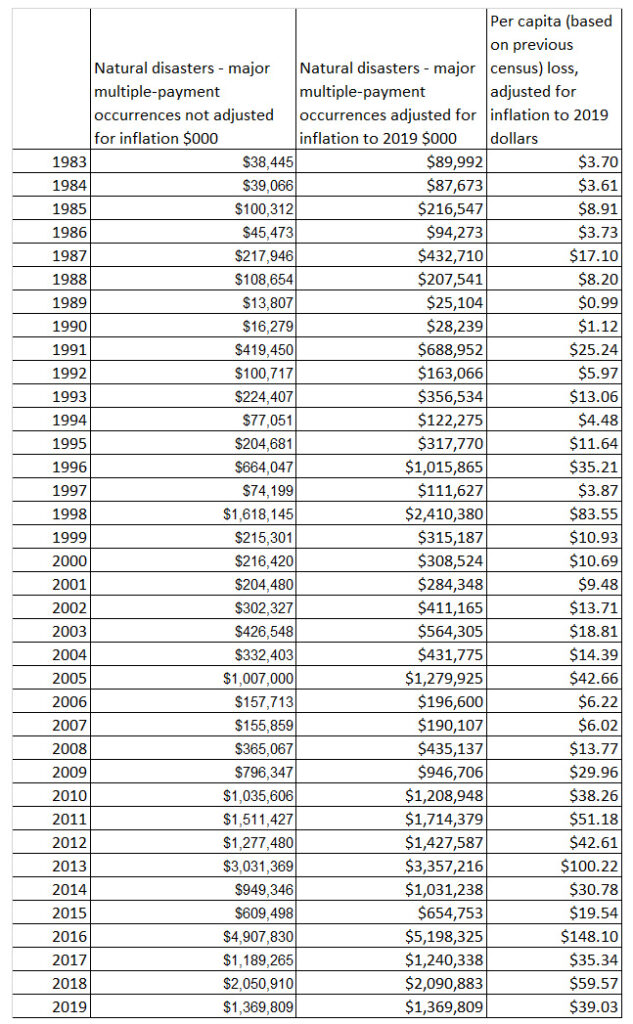 It is not an exact apples-to-apples comparison. What exactly constitutes a “natural disasters — major multiple-payment occurrence” was different in the 1980s and 1990s than it is today.

The methodology has improved since 2008 when IBC started using numbers from CatIQ, IBC economist Claudia Verno said in an interview. Before 2008 “the data was not as rigorously taken, so that is something we need to keep in mind when doing trend analysis.” 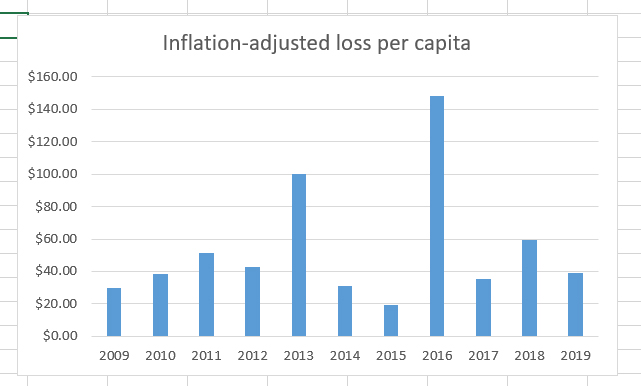 Canadian Underwriter showed its calculations to Verno and to Blair Feltmate, head of the Intact Centre on Climate Adaptation at the University of Waterloo. Feltmate was asked whether something happened, in the 2007-2010 time frame, that caused the losses in the past 10 years to be a lot higher than they were in the previous 25-year time frame.

Feltmate said the numbers, since 1983, definitely indicate a long-term increase in total claims from natural disasters such as flood, fire and wind.

Verno agrees. “People have more stuff, so there is more at risk. So I am not surprised to see the numbers being higher even on a per capita basis,” she said.

The increase in the amount of material goods that people have, or property at risk, is only a secondary factor, IBC notes. It is only amplifying an effect that is already underway. IBC says the primary cause of the increase in loss costs is the increase in frequency of severe weather events.

Both Feltmate and Verno suggested the numbers show society needs to act now to mitigate the impact of severe weather.

“You need more years, more decades of that data coming in before you can make an inference about whether it’s climate [or] whether it is capital accumulation. But by then it might be too late,” Verno said.

“By the time we have perfect data sets, upon which to take action to mitigate flood risk, it will be too late,” added Feltmate.  “Canada is moving in the right direction to limit the impacts of climate change and extreme weather risk, but we are moving far too slowly.”

Canadian Underwriter tried to show how the losses compare to the overall size of the Canadian economy. Canadian Underwriter downloaded gross domestic product figures from Statistics Canada, back to 1997. Those figures are in what StatsCan calls 2012 chained dollars, meaning they are essentially adjusted to what the dollar would buy in 2012. The total GDP has risen from about $1.2 trillion in 1997 to nearly $2 trillion last year in 2012 dollars. 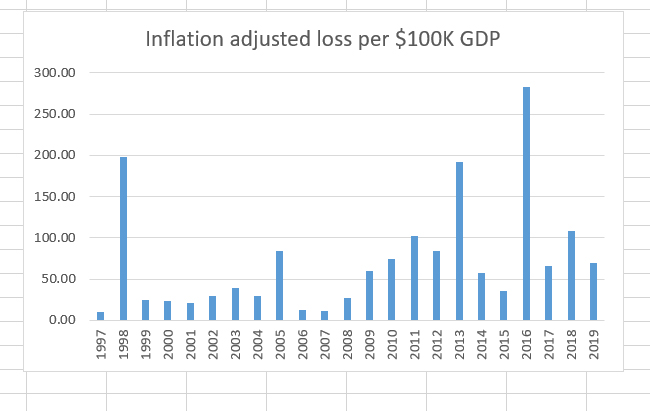 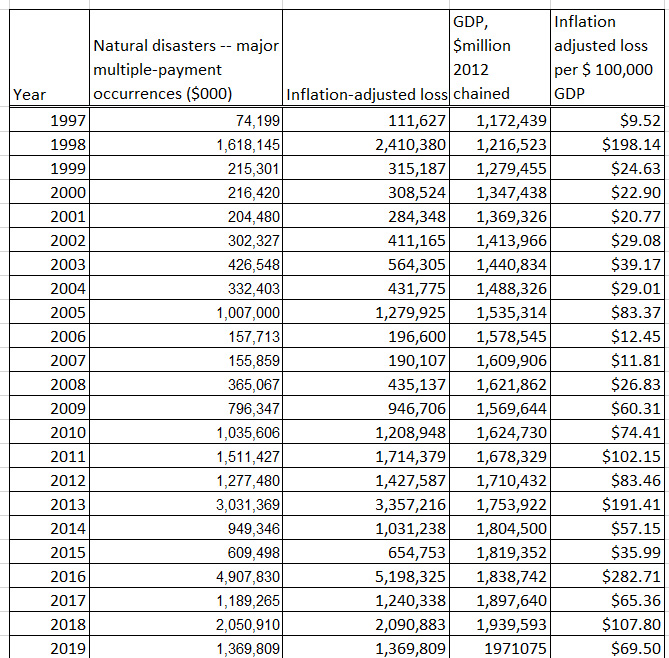