Hurricane Fiona could strike Atlantic Canada with tropical storm-force winds or stronger by Saturday, according to projections from the hurricane forecasters in Canada and the U.S.

An advisory issued 5 a.m. AST on Monday by the U.S. National Hurricane Center projected winds of at least 39 miles per hour and higher (63+ kilometres per hour) to hit Nova Scotia, Prince Edward Island and into southern Newfoundland by Friday.

The Canadian Hurricane Centre’s track issued Monday afternoon shows strong winds of 150 km/h in the waters just southeast of Halifax on Saturday, heading toward southern Newfoundland. Category 1 winds like this are very dangerous and will produce some damage, according to the Saffir-Simpson Hurricane Wind Scale.

“Well-constructed frame homes could have damage to roof, shingles, vinyl siding and gutters,” said the U.S. National Oceanic and Atmospheric Administration (NOAA). “Large branches of trees will snap and shallowly rooted trees may be toppled. Extensive damage to power lines and poles likely will result in power outages that could last a few to several days.”

The path of the hurricane or tropical storm could change between now and Saturday. As of Monday morning, Fiona’s centre was near the northern coast of the Dominican Republic, and “catastrophic and life-threatening flooding continues across much of Puerto Rico,” the U.S. National Hurricane Center reported. Maximum sustained winds were 140 km/h.

The Canadian Press reported Hurricane Fiona knocked out power across all of Puerto Rico. Up to 56 centimetres of rain had fallen in some areas, with another 38 centimetres expected in certain areas even as the storm moves away. 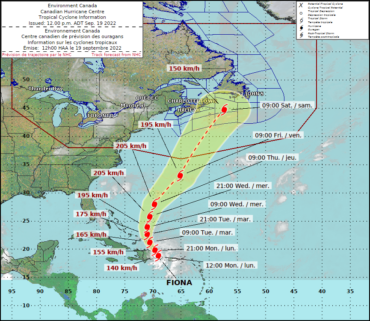 In Puerto Rico, the storm tore roofs off homes, ripped asphalt from roads and sent torrents pouring into homes. It also washed away a bridge in the central mountain town of Utuado that was installed by the National Guard after Hurricane Maria hit in 2017 as a Category 4 storm. Five years after that storm, more than 3,000 homes on the island still use blue tarps for their roofs, the Canadian Press reported.

The size of the insurance market for homeowners’ multiple-peril coverage in Puerto Rico is about $108 million for 2021, AM Best reported. Private flood insurance totals nearly $23 million.

Atlantic Canada is no stranger to hurricanes and tropical storms. In 2019, Hurricane Dorian caused about $105 million in insured damage, mostly in Nova Scotia ($62.2 million). Estimates at the time included $22.5 million in New Brunswick, $17.5 million in P.E.I., $2.5 million in Newfoundland and Labrador and $300,000 in Quebec.

Dorian struck Atlantic Canada as a post-tropical storm in September 2019 but maintained hurricane strength when it made landfall to the southwest of Halifax with estimates of sustained winds of 155 km/h. Roads were washed out, and homes and businesses were flooded.

Hurricane Larry in September 2021 caused an estimated $25 million in claims. The hurricane made landfall on the west side of Placentia Bay, Nfld. In the provincial capital, trees and power lines were knocked down, leaving about 60,000 customers without power.

In August, NOAA and Colorado State University hurricane researchers predicted an ‘above normal’ hurricane season for the seventh consecutive year. But the 2022 season started off very quietly.

There were no North Atlantic hurricanes in all of August. This has only happened twice since 1960, and it was the first time this occurred in 25 years, Glenn McGillivray, managing director of the Institute for Catastrophic Loss Reduction told Canadian Underwriter earlier this month.

“Hurricane season officially runs to Nov. 30, so there is still plenty of time for an active season,” he added. “What’s more, hurricanes don’t mind the calendar. The season could run straight through to the end of the year and into 2023, like it did in 2005, for example. We’ll have to see what happens.”