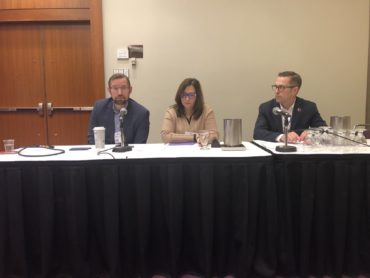 Data is a tricky balancing act: You need it to make sound decisions, but if the numbers become the be-all and end-all, it can lead to some pretty questionable corporate behaviours and leadership decisions.

Relying on data and managing by numbers isn’t a good way to lead staff, Vernon said. To illustrate his point, he told a story from earlier in his career when he created a balanced scorecard for adjusters; it included the target numbers required to prove someone was doing well at their job. People ended up doing “the craziest things,” as a result, he recounted.

For example, in order to meet target average handle times numbers, staff would hang up with clients in the middle of a conversation or get their friends to call and speak to them for a few minutes. One adjuster would come in early and cherry pick the easiest cases, get them done and make it look like her productivity was high. She was rewarded with a trip. It wasn’t until after that her scheme was uncovered.

“That’s not the type of behaviour you want to encourage,” Vernon said. “Data can be dangerous if you don’t use it wisely and are not thinking about it in the context of work.”

Don’t use data as a a crutch, he warned. Instead, use it as a diagnostic tool. For example, if someone is spending more time on calls, see why that is. Maybe they’re just unlucky getting all of the chatty clients, or perhaps they do need some extra training.

“It’s absolutely critical to bring that lens to treat data with respect, to recognize the value it provides,” he said. “But don’t glorify it to the point where you stop thinking and lose the spirit of why we’re here, which is: We’re here to help people. Data is just around to make sure we can do it as best we can.”

Data is also meant to help with making decisions. Don’t go so far as to totally disregard data, but don’t go to the other extreme in which data is the only basis upon which you make decisions. That’s why leaders need to use context, Vernon said.

“That’s something that scares a lot of people,” he said. “They slip into a position where you’re managing by numbers instead of actually managing. So, you have to strike a delicate balance between making informed decisions using data, and losing the spirit of claims-handling by thinking about everything in numbers. You need to do a really good job of [maintaining a balance].”

One thing data has certainly done is slow down the claims journey, panellist Karen Mican, senior vice president of claims at RSA, pointed out. “We have more data than ever before,” she said. “That’s one of the challenges for our people….It sometimes takes them longer to get through the claims process at [first notice of loss]. The reason is, we’re capturing so many more data points.