Where brokers think they can improve in helping their clients

Brokers admit they could do better when it comes to comparing options for their clients, according to the Trusted Advisor Survey.

In Part 2 of the Canadian Underwriter Trusted Advisor series, we asked Canadian P&C insurance brokers to rate themselves on dimensions related to advice, choice and advocacy.

Generally speaking, commercial and personal lines brokers tended to give themselves lower marks for comparing coverage of different insurers with their first-time customers. They rated themselves even lower for presenting multiple quotes to clients.

This came up in our consumer survey as well in the first part of our survey. Customers scored brokers “below average” on comparing the coverage of different insurers and presenting multiple quotes to the consumer. 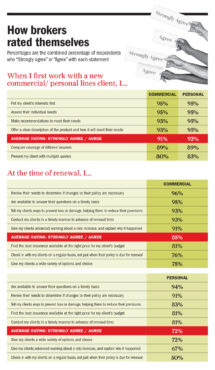 Several brokers told Canadian Underwriter this is a somewhat nuanced area of the business and depends a lot on the personal style of brokers and customers alike.

For brokers, two factors are at play when providing quotes to clients, as Brenda Rose, partner and vice president of FCA Insurance Brokers, puts it.

“We’ve got conflicting expectations,” she said. “One thing is to offer the most efficient process for the client and get the best match for their needs quickly. The other is to have a long, in-depth conversation about all of the different options that we might have available, some of which might be entirely unsuitable, and get into the fine print. Different consumers have different desires for how in-depth those conversations are. We have to be prepared if the customer wants the whole discussion.”

David Pettigrew, president and CEO of Harvard Western Insurance, compared it to a duck in the water in Part 1 of our survey. “You don’t see the feet underneath the water going crazy. You just see the duck gliding on the surface. Sometimes the client may not see all of that activity happening behind the scenes.”

Brokers, however, did score themselves very highly in almost all other aspects of the survey. Average scores tended to be very high, ranging between 85% and 95% for commercial and personal lines brokers alike, with the only exception being a 72% average when personal lines brokers answered questions about service offered at the time of renewal. Notwithstanding the high overall averages, there were some nuances in how brokers rated themselves in specific areas of service.

More than 180 brokers across Canada completed the second part of survey. Thirty per cent identified as owners or principals. About one-quarter (26%) said they were producers with no management responsibilities, while 20% said they were producers with some management responsibilities. Most (72%) reported that their brokerage dealt with a mix of personal and commercial lines. Most (24%) of respondents had between 20 to 49 employees at their brokerage. Respondents averaged 21 years of experience as a broker. The average estimated age was about 53 years old. There was a 52% (male) and 48% (female) gender split.

Back to Trusted Advisor Hub
Print this page Share