Boats with high-tech safety gadgets are starting to look a lot more like cars nowadays — and that means more expensive and difficult repairs, as Aviva Canada reports.

“The big trend we are seeing right now in watercraft is big improvements in technology,” says Shawn Mckone, a senior manager with specialty claims at Aviva Canada. “it’s very similar to what we saw with automobiles 10-15 years ago.”

“Car manufacturers started to introduce all of this new technology, and up until recently boats really lagged on this. But now we’re seeing boats definitely starting to catch up.”

Much of the new high-tech is designed to make boating easier and more accessible, Mckone says.

For example, boats today are equipped with high-tech navigational devices, cameras, and sensors. Safety devices such as kill switches common on personal watercraft can turn the engine off automatically if a rogue wave knocks the operator off the boat or away from the helm. Sensors let you know if you are too close to an object in the water.

Some of the larger boats use auto-docking systems. “These systems are using artificial intelligence, and it’s very similar to self-parking cars,” says Mckone. “That hasn’t really translated into most of the consumer market at this stage, but it’s cutting-edge, and we are increasingly seeing it become part of the market.” 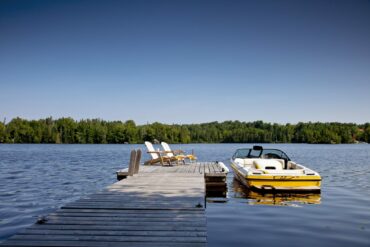 Technology is a game-changer on the claims side. “The impact of all of this technology is that it’s making it much more expensive and difficult to repair,” Mckone says. “Ultimately, it is leading to more boats being total losses, and that’s exactly what we saw with automobiles as well. It’s the exact same trend.”

There is also the matter of the technology failing. The fact that modern boats are increasingly dependent on high-tech to operate makes the repairs more complex.

Gone are the days when a do-it-yourselfer could open up an outboard engine and spend a couple of hours on a summer day tinkering with the motor to get it running again. Now the technical expertise and know-how to fix a boat resides with the trained specialists at the marinas.

“There’s more specialized labour to repair things,” as Mckone observes. “It used to be someone who is kind of familiar with boat repairs could repair a lot of different types of boats. Now we’ve seen, because of the specialization, it’s becoming more restrictive. And it’s affecting things like labour costs.”

When it comes to repairs, today’s boat owners should be following the recommendations of their boat manufacturer, as well as turning to the marina for repairs and maintenance, Mckone says.

Preventative maintenance is the key to avoiding large watercraft losses. In some instances, damage due to poor maintenance is not covered by an insurance policy, since such losses are often foreseeable and can be prevented through good maintenance.” A few individual policies may cover losses related to lack of maintenance in certain circumstances, but brokers and clients should go over the specific policy wordings and review coverage.

What types of claims happen due to poor maintenance?

“Not winterizing an engine can lead to freezing or cracking,” says Mckone. “You’re probably looking at a cost of minimum $10,000 if that happens.”

Also, boaters should be conducting an annual inspection of the rubber seals on the bellows. The bellows are rubber gaskets that keep water out of the boat between the boat and the outdrives.

“If you skip out the inspection of the seals, and the seals wear out, that could lead to partial or total sinking of the boat,” Mckone says. “Obviously, the cost associated with that would be devastating—especially if you factor in all of the new electronic equipment we’re seeing.”

But wouldn’t all of the electronic gadgets on a boat be waterproof?

“You’d think, because something is on a boat, it would be waterproof,” Mckone says. “But a lot of that stuff actually isn’t waterproof, and it’s not going to survive [contact with water] without severe water damage. We emphasize the importance of good maintenance, which can help you avoid these types of problems.”

More News
Related
How a South African court applied the U.K. test case in a B.I. dispute
Are your condo clients covered for ‘special assessment’ costs?
The unique coverages for collector cars