Why construction projects are causing headaches for insurers

Construction projects have increased in complexity in recent times due to their size and where they’re taking place. That’s creating new risks for insurers, according to Darren Tasker, head of energy and construction in Canada for Allianz Global Corporate & Specialty.

That’s because big buildings in small spaces require expert workmanship. Construction in established communities means being sure not to disrupt what’s already there. One mistake could set off a chain reaction of claims.

In its report, RLB stated “there were 20,000 condominium starts in 2020, accounting for the majority of the cranes [in Toronto].”

The number of new condos being built is of interest to insurers. More buildings are being built in smaller footprints, which is making construction projects more complex. There is pressure on construction firms to ensure everything fits nicely, as Tasker explains. One defect or construction issue could lead to a significant claim due to the size of the building. 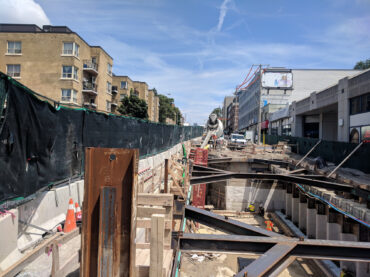 Furthermore, infrastructure projects are being built in areas that are already developed, Tasker told Canadian Underwriter. The Eglinton Crosstown in Toronto illustrates the point. It’s a major transit project that is being built underground and aboveground along Eglinton Road, a major central artery in Toronto that features well-established roads, businesses, and homes.

“Companies or governments are building in areas that they either haven’t built before, or [where] there’s a lot more density in terms of people and other buildings,” Tasker observed. “That makes things more challenging from logistics and construction standpoint.”

Moreover, companies are “looking to economies of scale and just do things bigger than before,” as Tasker said, so now plenty of new risks have been added to the table.

One such risk is technology. New materials and tech may be providing the ability to do projects in new and more efficient ways, but those methods and tools haven’t been fully tested yet. “There are associated risks whenever something is new,” Tasker pointed out.

With the building boom ongoing, Tasker said brokers can do things to help reduce the chance of losses as much as possible. For example, when working with a client, if a component breaks, what’s the procedure to get a new one? If something goes wrong, basically, what’s the plan?

“Secure that plan, secure contracts, or secure their place in the line for products, equipment, and materials,” Tasker advised in an interview. “That will help reduce the cost if something goes wrong. If a client has a good relationship and is in good standing with a particular supplier, [then] if something does go wrong, they’re at the front of the line. Maybe they only have to wait a couple months instead of 12 months.

“It’s mostly about planning and contingency planning. That’s something that the broker can sort of educate the client and make sure that that’s being taken care of and is top of mind.”