Wildfire risk is elevated this year. Why the pandemic made it worse

The central and Pacific coast of British Columbia could see an increased risk of wildfires this year, a new report predicts.

“Areas of western Canada are already experiencing frequent and severe droughts,” the report stated. “Scientists expect new areas across the country to be affected and drought to become even more frequent and severe. Drought threatens Canada’s forest and increases the threat of wildfires.”

The report went on to note that even though central areas of the Prairie provinces are in areas of increased risk, it’s expected that conditions will stay close to the norm. However, there may be scattered spots that are at a higher risk. 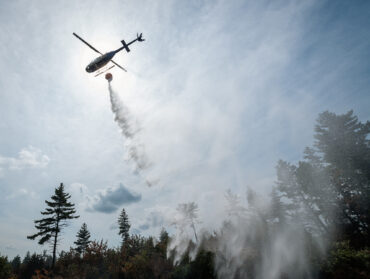 The federal government says there are about 8,000 wildfires in Canada each year with an average burn of 2.5 million hectares, the report notes. Almost half (45%) of all fires are caused by lightning.

But because the fires typically occur in remote areas and often in clusters, they represent 81% of the total area burned. The remaining chunk of fires are caused by humans in more populated areas, so they can be reported quickly and extinguished.

Fighting wildfires will be a challenge as the global COVID-19 pandemic continues on. It presents “unprecedented challenges” to firefighters, AGCS pointed out.

“The pandemic has raised the stakes at the worst possible time, forest managers say, and is forcing firefighters, officials, and communities to rethink how they combat blazes,” the report said.

For example, one practice was to move firefighters from one blaze to another in camping groups when not on the front lines. “This previous practice is now considered a dangerous incubator for COVID-19,” the report said.

Further increasing risks for firefighters is the combination of smoke inhalation and respiratory complications caused by COVID-19.

A number of ideas on the table include:

Other ideas include water-dropping helicopters deployed day and night and offering paid sick leave to encourage absences when needed.

“The continued spread of the coronavirus, as well as the economic paralysis that has accompanied health restrictions, has impacted every aspect of wildland firefighting,” AGCS said. “With fires beginning earlier in the spring and persisting later into the fall, communities may have to contend with the dual risk of COVID-19 and wildfire for several months.”