November 29, 2016   by Steve Megargee and Jonathan Mattise - THE ASSOCIATED PRESS

PIGEON FORGE, Tenn. – Wildfires fueled by high winds roared through parts of the Great Smoky Mountains, burning the doorstep of the Dollywood theme park, destroying a resort and chasing thousands of people from their homes. 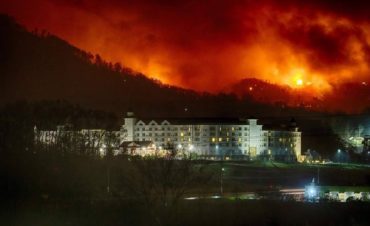 National Guard troops arrived Tuesday to help overwhelmed firefighters, and Mother Nature provided a little relief as the winds calmed and rain fell in some areas. Forecasters said it would not be enough to end the relentless drought that has spread across the South and set the stage over the past few weeks for wildfires in Tennessee, Georgia and North Carolina.

“There were times last night that we had wind gusts in excess of 87 miles an hour. That is hurricane force. That is nowhere to be when trying to fight a fire,” Gatlinburg Fire Chief Greg Miller said at a news conference Tuesday.

Prayers for all the lives, property, and wildlife being effected by the #GSMNP fire. #prayforgatlinburg #Gatlinburg #prayforrain pic.twitter.com/Ywpu6MegMl

Hundreds of homes and other buildings, including a 16-story hotel, were damaged or destroyed by flames.

Emergency officials ordered evacuations in downtown Gatlinburg and Pigeon Forge and in other areas of Sevier County near the Great Smoky Mountains. About 14,000 residents and visitors were evacuated from Gatlinburg alone.

About 1,200 people took shelter at the Gatlinburg Community Center and the Rocky Top Sports Park and several other shelters opened. TV broadcasts showed residents streaming out of town just as rain started to wet roads.

At least a dozen people were taken to hospitals, including some with burns. No deaths were reported and officials said they had not received any reports of missing people.

In downtown Gatlinburg, workers at Ripley’s Aquarium of the Smokies had to flee because of the wildfires and left behind more than 10,000 fish and other animals. So far, the building appeared OK.

“The aquarium, as far as we looked at this morning, was intact,” said Sevier County Mayor Larry Waters. “I understand that they had a generator so they were able to do what they needed to do to protect the animals.”

#BreakingNow: @T_E_M_A reports 30 structures, including 16-story hotel and apartments, are on fire in #Gatlinburg #PigeonForge pic.twitter.com/WWat3LNBBj

Based on preliminary surveys, the Westgate Smoky Mountain Resort & Spa in Gatlinburg “is likely entirely gone,” the Tennessee Emergency Management Agency said in a news release. The agency had previously said it had reports that the Ober Gatlinburg amusement park and ski area had been destroyed as well, but later said resort officials had checked in and said the property was fine.

Officials with Dollywood, the amusement park named after country music icon Dolly Parton, said the theme park wasn’t damaged, but more than a dozen cabins operated by the park had been.

Dollywood suspended park operations at least through Wednesday. Its DreamMore resort will be open on a limited basis as a shelter and for registered guests.

Just hours before the fires spread, the singer appeared in a video to urge people to prevent forest fires.

Please PRAY for #Gatlinburg. Over 100 structures have been destroyed. Thankfully, no deaths have been reported. pic.twitter.com/JtwCSdQd3Y

Parton appears with Smokey the Bear in the 30-second video released Sunday by Great Smoky Mountains National Park. She tells people to avoid burning leaves and parking vehicles on dry grass, and warns that even a campfire can spark a wildfire.

Parton is a native of Sevier County, which includes both Gatlinburg and nearby Pigeon Forge.

In the mid-1980s, Parton partnered with the Herschend family who ran the park, then known as Silver Dollar City. It opened under the new name of Dollywood in 1986.

Rain showers ended in the Gatlinburg area about 8 a.m. Tuesday, said National Weather Service meteorologist Sam Roberts. No more meaningful rainfall was expected until about midnight Tuesday, and would last through Wednesday.

After weeks of punishing drought, any rain should be soaked up quickly, forecasters said. Rainfall amounts have been 10 to 15 inches below normal during the past three months in many parts of the South.

“I think we racked up deficits that are going to be too much to overcome with just one storm system,” said Mark Svoboda, director of the National Drought Mitigation Center in Lincoln, Nebraska.

In Mississippi, trees were reported downed Monday in nearly 20 counties across the state. Sustained winds of 30 to 40 mph – with gusts of more than 50 mph – were reported and more than 2 inches of rain fell in some areas.

#BreakingNow: A look at the aftermath left from the #wildfire on roadway up to Ober #Gatlinburg.
pic.twitter.com/SJyaxkQgZ5

Due to continued erratic winds, the fires are very unpredictable and more fire growth is expected. pic.twitter.com/BYd9ANQeT4

Buildings will be rebuilt, forests will regrow, but families will never be the same. #PrayForEastTennessee #pigeonforge #Gatlinburg pic.twitter.com/y0Uh11wPLG

Thanks to all the brave men and women stepping in the face of fire to protect their fellow community.#Gatlinburg pic.twitter.com/79GUe43uSH