As the southeastern United States braces for Hurricane Florence – one year after Hurricanes Harvey, Irma and Maria caused widespread destruction in the country – the question of whether there is sufficient reinsurance capacity is again thrust into the spotlight.

Last year, global insured losses from disaster events were the highest ever, with Hurricanes Harvey, Irma and Maria causing more than US$90 billion in insured damage, Swiss Re reported this past April. So, will Category 4 Hurricane Florence – which some are already calling the “storm of a lifetime” – affect capacity and spur an increase in rates in Canada? 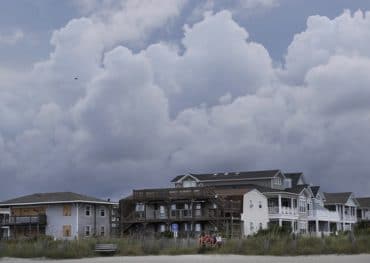 Women sit on a bench as they look toward the ocean in advance of Hurricane Florence on Wrightsville Beach, N.C., Tuesday, Sept. 11, 2018. Florence exploded into a potentially catastrophic hurricane Monday as it closed in on North and South Carolina, carrying winds up to 140 mph (220 kph) and water that could wreak havoc over a wide stretch of the eastern United States later this week. (AP Photo/Chuck Burton)

“We will have to see how the storms that are in line behind Florence play out, but for now, there is way too much capital in the reinsurance and [insurance-linked securities] markets to see any significant changes in rate,” McGillivray said.

McGillivray said he does not anticipate Florence having any impact “large or small” on reinsurance renewals. Renewal submissions are already flowing into reinsurers with many largely finalized or close to finalization. “Last year’s record for cat losses barely made a dent on renewals and this year could very well be the same,” he said. Hurricanes Harvey, Irma and Maria, “plus record California wildfires, two earthquakes in Mexico and other events essentially had no impact on rates.”

After last year, investors “re-loaded” money back into securities such as cat bonds, McGillivray said. “Had this capital not re-entered the market, we may have seen some hardening, but that didn’t come to pass.”

Swiss Re declined to comment on any possible impact on reinsurance rates, saying “Florence is an ongoing situation and [we] don’t speculate on pricing.”

Jim Eso, senior vice president of property and casualty, for Crawford and Company (Canada) Inc., said Tuesday the current forecast track suggests Hurricane Florence will “collapse fairly quickly and transition to a tropical depression” soon after making landfall in the Carolinas. If the rain pushes north ahead of the storm, the most likely impact to Canada will be in southern Ontario later this coming weekend. However, storm models so far suggest this will not happen, with heavy rain extending as far as Ohio, Pennsylvania and New York.

“We will continue to monitor the storm and be ready to react if things change,” Eso said. “We are also closely working with our U.S. catastrophic response team regarding resource requirements in the U.S. as they prepare to respond to what will be a major event for U.S. insurers.”