VANCOUVER – Another wicked winter storm is set to churn across most of British Columbia, dumping heavy rain on Metro Vancouver, parts of Vancouver Island and the central and inner south coasts, while bringing snow, wind or freezing rain to other regions.

Environment Canada has posted warnings or special weather statements for much of central and southern B.C., while BC Hydro says it is bracing for electrical outages caused by high winds. 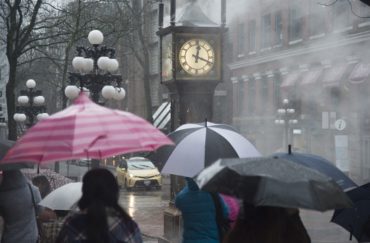 People walk by the steam clock in Gas Town in downtown Vancouver, B.C., Tuesday, December, 31, 2019. A heavy rain storm is hitting the lower mainland expecting to leave 66mm of rain in the next 24 hours. THE CANADIAN PRESS/Jonathan Hayward

Forecasters warn the approaching storm will hit the central coast and northern Vancouver Island first, packing 100 to 150 millimetres of rain, then intensify across the province, carrying snow and rain through Friday.

As much as 90 millimetres of rain is forecast over Howe Sound and Metro Vancouver, along with a chance of wet snow late Thursday, while snow is due to arrive over the central and southern Interior by Thursday evening.

The weather office says north central B.C., from Terrace and Kitimat east to the Alberta boundary, will see 20 to 30 centimetres of snow, while freezing rain could hit the central Interior as the storm pushes northward early Friday.

BC Hydro says it has restored power to most of the roughly 160,000 central and southern Interior customers who lost power in a New Year’s Eve snowstorm but several thousand are still in the dark around Kamloops, Vernon, Salmon Arm and Nakusp.

A statement from the utility says it is now preparing for possible damage from high winds linked to the latest storm set to hammer the south coast and Vancouver Island.

Customers in those areas are encouraged to prepare for potential outages, the statement says.

This report by The Canadian Press was first published Jan. 2, 2020.