Worldwide 3D printer revenue up by more than 18% year-over-year in 2016, report says

3D printer shipments increased 29%, while revenue grew by more than 18% year-over-year in 2016, according to a new report from Framingham, Mass.-based International Data Corporation (IDC), a global provider of market intelligence, advisory services and events for the information technology, telecommunications and consumer technology markets. 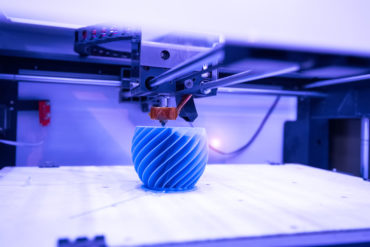 “The 3D printing market surge continues on a worldwide basis with more technology and materials options, which are driving more investment in 3D printers and greater utilization of the equipment that has been installed,” said Tim Greene, research director of hardcopy solutions at IDC, in a press release on Tuesday. He added that the corporation is seeing “exciting growth in some of the key technology segments,” with some growing at double-digit rates year-over-year.

According to the Worldwide 3D Printer Shipment Tracker, FFF/FDM (fused filament fabrication/fused deposition modelling) and stereolithography were the fastest-growing technology segments. Each of those segments grew by nearly 30% in 2016 compared to 2015. 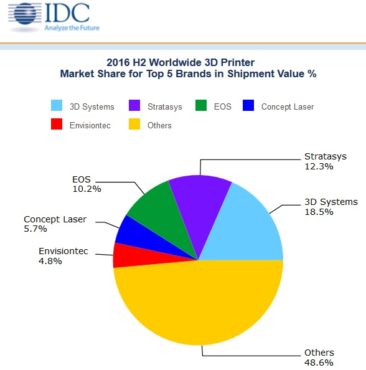 Regionally, the strongest growth in 3D printer shipments came from the Asia/Pacific region (excluding Japan), Central & Eastern Europe and the Middle East & Africa. Shipments in Asia/Pacific surged in 2016, making it the largest 3D printer region in the world in 2016, the release said, adding that “3D printer shipments in North America recovered nicely in the second half of 2016, but were still down for the year.”

IDC tracker products provide accurate and timely market size, vendor share and forecasts for hundreds of technology markets from more than 110 countries around the globe. Using proprietary tools and research processes, IDC’s Trackers are updated on a semiannual, quarterly and monthly basis.

IDC has more than 1,100 analysts worldwide, offering global, regional and local expertise on technology and industry opportunities and trends. The corporation’s analyses and insights help IT professionals, business executives and the investment community to make fact-based technology decisions and to achieve their key business objectives, the release said. Founded in 1964, IDC is a wholly-owned subsidiary of International Data Group (IDG), a media, data and marketing services company.

More News
Related
Worldwide small- and medium-sized business IT spending to top US$676 billion in 2021: International Data Corporation
Internet of Things spending to reach US$1.29 trillion by 2020, insurance industry to see fast spending growth: report
Global organizations will spend US$1.2 trillion on “digital transformation technologies” in 2017: International Data Corporation
Global IT spending forecast to reach US$2.7 trillion in 2020, led by financial services, manufacturing and healthcare