Worldwide spending on security technology is forecast to reach US$81.7 billion this year, according to a recently released guide from International Data Corporation (IDC), a global provider of market intelligence, advisory services and events for the information technology, telecommunications and consumer technology markets. 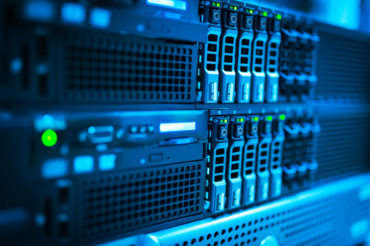 The update to the Worldwide Semiannual Security Spending Guide, released earlier this week, forecast worldwide revenues for security-related hardware, software and services to reach US$81.7 billion in 2017, an increase of 8.2% over 2016. Global spending on security solutions is expected to accelerate slightly over the next several years, achieving a compound annual growth rate (CAGR) of 8.7% through 2020, when revenues will be nearly US$105 billion.

“The rapid growth of digital transformation is putting pressures on companies across all industries to proactively invest in security to protect themselves against known and unknown threats,” said Eileen Smith, program director of customer insights and analysis at IDC, in a statement on Wednesday. “On a global basis, the banking, discrete manufacturing and federal/central government industries will spend the most on security hardware, software, and services throughout the 2015-2020 forecast. Combined, these three industries will deliver more than 30% of the worldwide total in 2017.”

In addition to the banking, discrete manufacturing and federal/central government industries, three other industries – process manufacturing, professional services and telecommunications – will each spend more than US$5 billion on security products this year, IDC reported. These six industries will remain the largest for security-related spending throughout the forecast period, while a robust CAGR of 11.2% will enable telecommunications to move into the number 5 position in 2018, the statement said.

Following telecommunications, the industries with the next fastest five-year CAGRs are state/local government (10.2%), healthcare (9.8%), utilities (9.7%) and banking (9.5%).

The report looked at 20 industries in total, including insurance, in eight regions and 53 countries. 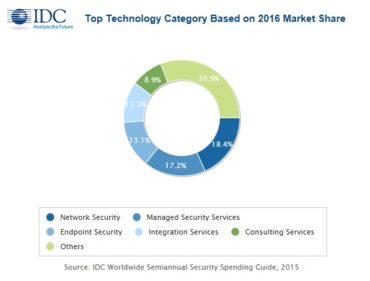 Services will be the largest area of security-related spending throughout the forecast, led by three of the five largest technology categories: managed security services, integration services and consulting services. Together, companies will spend nearly US$31.2 billion, more than 38% of the worldwide total, on these three categories in 2017, the spending guide said. Network security (hardware and software combined) will be the largest category of security-related spending in 2017 at US$15.2 billion, while endpoint security software will be the third largest category at US$10.2 billion.

From a geographic perspective, the United States will be the largest market for security products throughout the forecast, with an expectation of US$36.9 billion in security-related investments in 2017. Western Europe will be the second largest market, with spending of nearly US$19.2 billion this year, followed by the Asia/Pacific (excluding Japan) region. Asia/Pacific excluding Japan will be the fastest growing region with a CAGR of 18.5% over the 2015-2020 forecast period, followed by the Middle East & Africa (9.2% CAGR) and Western Europe (8% CAGR).

“European organizations show a strong focus on security matters with data, cloud, and mobile security being the top three security concerns,” said Angela Vacca, senior research manager of customer insights and analysis at IDC. “In particular, Western European utilities, professional services and healthcare institutions will increase their security spending the most, while the banking industry remains the largest market.”

From a company size perspective, large and very large businesses (those with more than 500 employees) will be responsible for roughly two-thirds of all security-related spending throughout the forecast. IDC also expects very large businesses (more than 1,000 employees) to pass the US$50 billion spending level in 2019. Small- and medium-sized businesses (SMBs) will also be a significant contributor to big data and analytics spending, with the remaining one-third of worldwide revenues coming from companies with fewer than 500 employees.