Zurich Insurance Group has reported net income after tax attributable to shareholders (NIAS) of US$912 million for the third quarter of 2016 ending Sept. 30, up 342% from US$207 million in the same quarter in 2015. 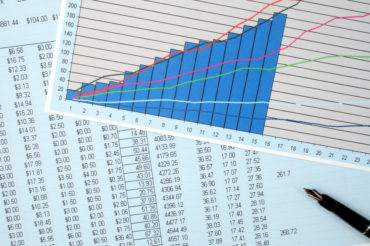 “Zurich has maintained its positive momentum with underlying improvement in all of our core businesses,” said Group chief financial officer George Quinn in the statement. “The strengthening of Zurich’s management team and simplification of the Group organizational structure have been completed, while absolute costs have continued to fall, reflecting actions taken earlier in the year. We are also strongly capitalized, with solvency well within our target range.” 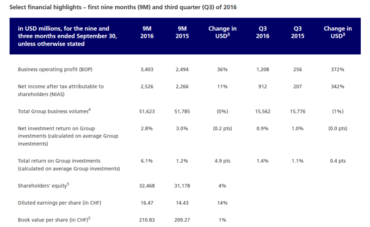 General Insurance reported a BOP of US$1.8 billion for the first nine months of 2016, up 85% from the prior year. The results benefited from an improved underlying combined ratio, a benign catastrophe environment and foreign exchange movements, Zurich reported in the statement. The combined ratio for the nine months improved by 3.5 percentage points over the prior-year period to 98.4%. Gross written premiums (GWP) declined by 3.3% in U.S. dollar terms, “largely due to re-underwriting and further actions to improve performance announced last year,” Zurich said.

Global Life BOP for the first nine months of 2016 was US$1 billion, up 3.1% compared to the same period in 2015. Performance improved in all regions except North America. The improvement was driven by underlying growth in Latin America and favourable experience relative to assumptions in Europe, Middle East and Africa (EMEA) and Asia Pacific. GWP, policy fees and insurance deposits for the nine-month period increased by 5.5% to US$22.5 billion, with “robust growth in EMEA and Asia Pacific.” 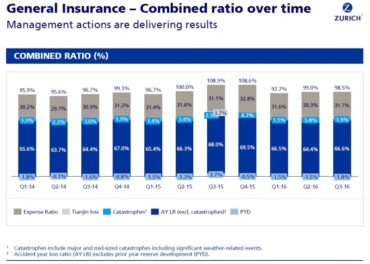 Farmers BOP was flat for the nine-month period at US$1.1 billion as continued momentum at Farmers Management Services was balanced out by a lower contribution from Farmers Re, Zurich reported. Farmers Management Services BOP rose 4% to US$1 billion, supported by increased fee-income from the Farmers Exchanges, which are owned by their policyholders. Farmers Re recorded a BOP of US$21 million helped by a one-off gain, while premium volume reduced due to lower quota share reinsurance participation. The third quarter was benign in terms of natural catastrophe losses whereas the nine-month period was affected by a high level of natural catastrophe claims, in particular from storms in Texas, the statement noted.

The Non-Core Businesses, which comprise run-off portfolios that are managed with the intention of proactively reducing risk and releasing capital, reported a BOP of US$42 million for 9M 2016. That compares to a loss of US$12 million in the comparable period in 2015. The bulk of those gains came from the release of long-term reserves as a consequence of a buy-back program for a variable annuity product in the United States.

In Other Operating Businesses, the operating loss widened by 3% to US$565 million for the nine-month period.

More News
Related
Zurich reports business operating profit of US$4.5 billion for 2016, up 55% from prior-year period
AIG reports net income of US$462 million for Q3 2016 compared to net loss of US$231 million in Q3 2015
P&C reinsurance gross written premiums for half-year up 17.3% to 5.4 billion euros for Hannover Re
Economical Insurance gross written premiums up 6.7% to $550 million in third quarter of 2016 from prior-year quarter