The wife of an Abbotsford, B.C. insurance broker has been awarded nearly $574,000 as a result of a vehicle accident, but the award would have been $765,000 had the plaintiff not been found partly liable for the accident.

She was found 25% negligent mainly because she was not continuously alert about the car’s approach to the crosswalk that she and her children were crossing, the court found. But she also was wearing dark clothing during a rainy evening, which she should have factored into her assessment about whether it was safe to cross, the court found. 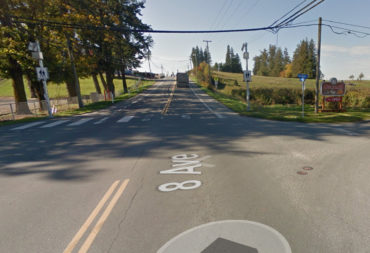 “While it is not negligence to wear dark clothing, Ms. Parmar should have appreciated that it would be difficult for a driver on such a night to see a person dressed in dark clothing,” British Columbia Supreme Court Justice Barbara Norell wrote in Parmar v. Rink, released this past Monday. “As a result, she had a duty to wait until she could make an assessment of the speed of the oncoming vehicle, and to ensure that the driver saw her and her children and was slowing.”

Sarbjit Kaur Parmar was walking north across Huntingdon Road in Abbotsford the evening of Dec. 17, 2015 with her 11-year-old daughter and seven-year-old son.

Harold Rink, a 79-year-old retired teacher, was driving his Mercedes SUV west on Huntingdon Road on his way home from a dinner with friends. It was dark and rainy at the time.

Parmar and her kids were using a marked crosswalk that has an “X” painted on the road about 75 metres away, Justice Barbara Norell of the British Columbia Supreme Court wrote in Parmar v. Rink, released this past Monday. There are retroreflective crosswalk signs on both sides of the road. The crosswalk is beside the intersection of Huntingdon and Gladwin Rd.

Rink, who was sued by Parmar, said he first saw Parmar and her son when they were directly in front of his vehicle, a split second before his vehicle hit them. He slammed on the brakes but it was too late.

Parmar was thrown about 14 metres. The trio had been at a holiday concert at the children’s school. The posted speed limit is 60 km/h with a school zone speed limit of 30 km/h that is in effect between 8 a.m. and 5 p.m.

Rink had decided to drive on Huntingdon Road instead of the highway because of the poor visibility.

Parmar said she did not know how far away Rink’s car was and could not determine its speed. However she thought she could cross the intersection.

Her injuries included mild traumatic brain injury, broken left wrist, broken left shoulder and a broken right leg in two places. Her daughter, who was crossing ahead of Parmar, was not hit. Accident reconstruction evidence indicates the vehicle that hit Parmar was travelling between 41 and 48 km/h.

Rink and Parmar did not agree on liability. Rink said the visibility was “terrible” and he could only see 30 to 40 feet ahead. Rink argued that Parmar had a duty to wait until she could make an assessment of the speed of the oncoming vehicle, to ensure that the driver saw her and her children and to ensure the vehicle was slowing.

Ultimately Justice Norell ruled that Rink “failed to keep a proper look out and yield the right of way to Ms. Parmar while she was in the crosswalk.” But she still found Parmar was 25% liable, reasoning that that Parmar could not make a “reasoned assessment that she could safely proceed.” Therefore, Justice Norell ruled that Parmar had an obligation to watch the approaching car until she could make a determination of its speed -and whether it was slowing – before starting out or continuing to cross.

“Pedestrians in crosswalks are not required to exercise ‘extreme vigilance’ to ensure they won’t be struck,” Justice Gary Weatherill wrote in Suedet. “To prove contributory negligence on the part of a pedestrian, the defendant must show more than inattention. A defendant must also establish (1) at what distance the pedestrian should have realized from the speed of the approaching vehicle it was not going to yield; (2) it would it have been possible for a pedestrian to avoid being impacted; and (3) that a reasonable person in the circumstances of the plaintiff should have taken evasive action to avoid the impact.”

In Parmar v. Rink, an engineer testifying as an expert defence witness gave the court an opinion on Parmar’s ability to react to seeing Rink’s vehicle. That engineer told the court that Parmar’s last opportunity to stop short of the car was when she was about 3.7 metres away from impact. This distance corresponds to about the middle of the eastbound lane.

Section 179 (1) of B.C.’s Motor Vehicle Act, requires a motorist to “yield the right of way to a pedestrian where traffic control signals are not in place or not in operation when the pedestrian is crossing the highway in a crosswalk and the pedestrian is on the half of the highway on which the vehicle is travelling, or is approaching so closely from the other half of the highway that he or she is in danger.” Section 179 (2) states: “A pedestrian must not leave a curb or other place of safety and walk or run into the path of a vehicle that is so close it is impracticable for the driver to yield the right of way.”

More News
Related
Debate over liability when pedestrian hit on road with no sidewalk
Did the threshold for special awards against insurers just sink lower?
Supreme Court of Canada to hear coverage dispute over fatal motorcycle accident
Condo flooding liability 101