How waivers of liability could be harder to enforce

The Supreme Court of Canada could make a landmark decision on whether clients facing personal injury lawsuits can enforce waivers in court.

In Schnarr v. Blue Mountain Resorts Limited, the Court of Appeal for Ontario ruled in early 2018 that for two plaintiffs – who were injured while skiing – the waivers could be enforced.

Those plaintiffs – David Schnarr and Elizabeth Woodhouse – submitted last month their application for leave to appeal to the Supreme Court of Canada, said Shantona Chaudhury, partner with law firm Pape Chaudhury LLP, which is representing Schnarr and Woodhouse. 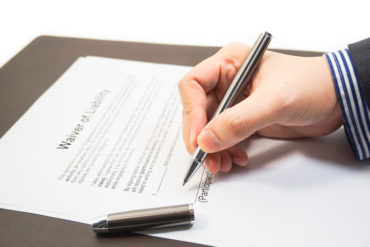 The next step is for a three-judge panel (Rosalie Silberman Abella, Clement Gascon and Russell Brown) to decide whether or not Canada’s top court will hear the appeal.

“Whatever the Supreme Court would have to say about this will affect other provinces,” Chaudhury told Canadian Underwriter Wednesday.

When the Supreme Court will decide whether to hear the appeal is not clear. It normally takes four to six weeks for the court to decide whether or not to hear an appeal, Chaudhury suggested. The timeline depends on several factors including holiday schedules.

Regardless of what the Supreme Court says, both lawsuits are expected to go to trial, Chaudhury said Wednesday.

If the Supreme Court of Canada rules that the Ontario Consumer Protection Act makes waivers invalid, clients could look at what Quebec businesses are doing to manage liability risk, Chaudhury suggested.

This, Chaudhury added, is because under Quebec law, defendants cannot use waivers to avoid liability for negligence or wrongful conduct that causes personal injury.

“The ski industry in Quebec is huge,” Chaudhury said. “They obviously have a means of dealing with whatever claims are brought against them. The industry hasn’t collapsed because they can’t rely on waivers.”

In Ontario, Schnarr and Woodhouse are alleging that the defendants failed in their duties under both the Occupiers Liability Act and the Consumer Protection Act. The allegations have not been proven in court.

Ontario’s Consumer Protection Act stipulates that consumers’ rights apply “despite any agreement or waiver to the contrary.” It also stipulates that suppliers’ goods must be of a “reasonably acceptable quality.” An agreement between buyer and seller is not enforceable if that agreement “purports to negate or vary any implied condition or warranty under the Sale of Goods Act” or any “deemed condition or warranty” under the Consumer Protection Act.

If the Supreme Court of Canada hears the appeal from Schnarr and Woodhouse, they will be “dealing with a fundamental issue, which is the intersection of consumer protection law and occupiers liability law,” Chaudhury said. “What they say about that is going to affect the law in the courts in every province, even though there may be differences in the specific laws.’’

Schnarr was hurt Mar. 26, 2011 while skiing on a trail at the Blue Mountain resort near Collingwood. He hit a piece of debris and struck a tree.

Woodhouse was hurt Dec. 23, 2008 at Snow Valley Ski Resort near Barrie while using a tow rope.

The Court of Appeal for Ontario disagreed.

It is “absurd” to tell the ski resorts that waivers protect them from negligence claims but not from warranty claims, Judge Ian Nordheimer wrote for the Court of Appeal for Ontario in its unanimous ruling. As a result, the appeal court ordered that the Superior Court of Justice proceed on the basis that the waivers apply not only to negligence allegations under the Occupiers’ Liability Act but also to breach of warranty allegations under the Consumer Protection Act.

“The Consumer Protection Act – by having this non-waivable warranty of quality of good or services – also has that implication that you can’t force people to give up their right to sue, so that’s really what’s at play here,” Chaudhury said.

In the ruling that Schnarr and Woodhouse are appealing, Judge Nordheimer argued that the Occupiers Liability Act conflicts with the Consumer Protection Act.

“Under the OLA, an occupier can obtain a waiver of liability (within limits as defined by the common law) from any person coming onto their premises. However, that same occupier, if they are also a supplier under the CPA, cannot obtain an equivalent waiver,” wrote Nordheimer. He added the Occupiers Liability Act was “intended to be an exhaustive scheme at least in relation to the liability of occupiers to entrants on their premises flowing from the maintenance or care of the premises.” The purpose of the OLA “would be undermined if the CPA were allowed to reintroduce another novel contractual duty that purports to subject occupiers to an obligation to warrant that their premises are of a ‘reasonably acceptable quality,’” Nordheimer wrote.

Section 1474 of the Civil Code of Quebec stipulates: A person may not exclude or limit his liability for material injury caused to another through an intentional or gross fault; a gross fault is a fault which shows gross recklessness, gross carelessness or gross negligence. He may not in any way exclude or limit his liability for bodily or moral injury caused to another.

More News
Related
One easy way to reduce ransomware risk
Hub’s Top 3 pot risks
How business interruption claims could play out in the legal marijuana space
Does CGL’s duty to defend apply to the insurance policy as a whole?