Why this claimant cannot sue over auto collision

A motorist should have known he was listed by his insurer as an excluded driver, an Ontario court has ruled.

Johnathon Trudeau filed a lawsuit against David Cavanagh as a result of a 2013 vehicle collision in Espanola.

Trudeau also applied for accident benefits with Wawanesa, which insured the vehicle Trudeau was driving. Trudeau’s accident benefits claim file was provided to Cavanagh’s lawyer in May, 2015 in preparation for an examination for discovery. 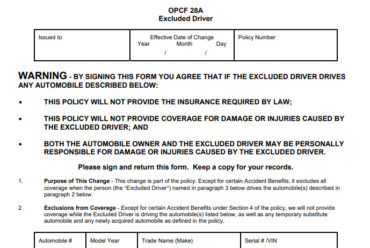 On discovering that Trudeau was an excluded driver under the Wawanesa policy, Cavanagh asked the Ontario Superior Court of Justice to dismiss the lawsuit – which Justice Robert Del Frate did in Trudeau v. Cavanagh,  released Apr. 29.

Section 267.6 of Ontario’s Insurance act prohibits a claimant from being awarded damages in  a motor vehicle bodily injury lawsuit if that claimants was violating the Compulsory Automobile Insurance Act in respect of the vehicle involved in the collision.

Trudeau’s vehicle was purchased a few days before the collision. His spouse called Brokerlink to insure the vehicle for both of them, Justice Del Frate wrote, adding Brokerlink placed the policy with Wawanesa under the same policy number issued in 2012 for a different vehicle.

But the endorsement excluding Trudeau as a driver stipulated the exclusion applies to all vehicles insured under the Wawanesa policy, Justice Del Frate wrote.

“Although there are situations where an honest but mistaken belief may absolve the insured, this is not one of them,” the judge wrote. “The excluded driver endorsement cannot be any clearer on the consequences of operating the motor vehicle as an ‘excluded driver.’”

There are “other avenues” open to Trudeau but those issues were not before Justice Del Frate. Instead, Justice Del Frate’s ruling was on whether there were any genuine issues requiring a trial. Justice Del Frate ruled there were none, agreeing with the defendant that the lawsuit must be summarily dismissed on the grounds that Trudeau ought to have known he was an excluded driver.

Wawanesa denied accident benefits except for the medical and rehabilitation because Trudeau was an excluded driver.

More News
Related
Auto insurers’ bitter costs dispute draws rebuke from judge
Your drunk client arrives home safely. Why your exposure does not end there
How Intact lost this battle over vehicle storage fees
This ‘leading practitioner’ in insurance law is now a judge