HALIFAX – Experts say the deaths of the seven Barho children in a ferocious Halifax house fire last week could lead to new fire safety measures and changes to the country’s building code.

Phil Rizcallah, director for construction research and development with the National Research Council of Canada, says the country will learn from the tragedy.

He says the federal research organization plans to study the fire marshal’s report, and that the house fire could lead to changes to the national building code. 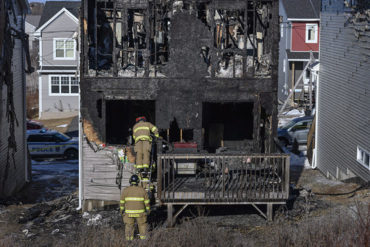 Firefighters investigate following a house fire that killed seven children in the Spryfield community in Halifax. THE CANADIAN PRESS/Darren Calabrese

Mike Holmes, one of Canada’s leading contractors and a well-known television host, says the tragedy is a wake-up call.

He says new homes should be built with fire-resistant products, including sprays that can help reduce the risk of a flash burn.

Fire officials are continuing to investigate the fast-moving blaze that left only a charred husk of the Barho home, located in a newly built residential housing enclave in a Halifax suburb.