OTTAWA – The Supreme Court of Canada has ruled against the City of Montreal in a case involving rioters who damaged police vehicles after a 2008 Montreal Canadiens victory.

Several police cars were set ablaze and some were destroyed in a riot after the Canadiens eliminated the Boston Bruins from the first round of the NHL playoffs in 2008. 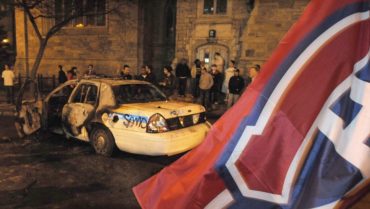 A burned out police cruiser sits in Downtown Montreal as violence erupted following the Montreal Canadiens’ elimination of the Boston Bruins in game 7 of the first round of Stanley Cup playoffs in Montreal, Monday, April 21, 2008. The Supreme Court of Canada has ruled against the City of Montreal in a case involving rioters who damaged police vehicles after a 2008 Montreal Canadiens victory. THE CANADIAN PRESS/Peter McCabe

After police identified some of the rioters, the city sued them individually, asking the courts to find them liable for the value of each police vehicle they took part in destroying.

In 2014, a Quebec Court judge ordered the rioters to pay the city the cost of the cars and their contents, on top of punitive damages, but said the offenders should only be ordered to pay for the damage that evidence showed they caused themselves.

The city wanted them held liable for the total damage of each car they helped destroy and appealed the decisions in six of 10 judgments, only to be turned down by the Court of Appeal, which refused to view the riots as a “joint venture” between rioters.

In its 6-1 decision today, the Supreme Court agreed with the lower courts, saying the city’s claim does not meet the requirements of Quebec law.

Justice Clement Gascon, writing for the majority, said the key question is: “To what extent can a rioter who has caused property damage be held solidarily liable to the victim for damage done to the same property by other rioters?”

He said he agreed with the lower courts.

“The evidence is such that it is possible to determine what specific damage to the victim’s property was caused by each of the identified rioters. That being the case, this legislative scheme cannot be circumvented by imposing liability … either. The appeal must therefore be dismissed.”

During the riot, 15 city police cars were vandalized, with nine being total losses and six others needing major repairs.