CHURCHILL, Man. – Omnitrax says the flooded-out rail line to Churchill, Man., could be fixed before this winter, but the company won’t be putting up the money to do it.

Omnitrax officials said Tuesday the price tag for the repairs would be between $20 million and $60 million and the work would take 60 days, starting at the beginning of September and finishing at the end of October – if no major issues arise.

But they said Denver-based Omnitrax has already put more than $75 million into the track – the only route into the community by land – between 1997 and 2015. 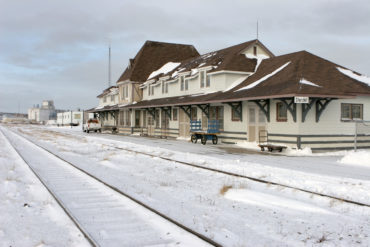 The province responded with a terse statement.

“What was made clear (Tuesday) by senior Omnitrax officials is that they are not prepared to repair, maintain or operate the rail line,” said Infrastructure Minister Blaine Pedersen.

“It appears that they intend to abandon the line.”

Churchill Mayor Mike Spence said something has to be done: “This is not acceptable.”

The subarctic community of 900 on the western shore of Hudson Bay has been looking for help since the rail line was severely damaged by flooding in May.

“We’re slowly getting used to being a fly-in, fly-out community,” said resident Joe Stover, adding they’ve been left with a lot of confusion and waiting.

Without the rail line, goods and people have to be flown in to Churchill at a much higher cost.

On Monday, the province said it will increase its subsidy for milk, infant formula and fresh fruit and vegetables. Right now a four-litre jug of milk is costing $12.