The business case for diversity and inclusion at a brokerage

If you truly want to connect with your customers, your organization must be diverse, an industry consultant suggests.

“There is room for improvement in corporate Canada, not just in property and casualty insurance, in ensuring women, visible minorities and people with disabilities are represented,” Chris Cornell, KPMG Canada’s national sector leader, insurance, told Canadian Underwriter in a recent interview.

“The brokerage community needs to reflect the demographics of the general population to ensure it is diverse enough to connect with and understand their customers.”

One indicator of how well the P&C insurance industry reflects the diversity of the Canadian population is a 2017  Conference Board of Canada survey commissioned by the Insurance Institute of Canada.

In Demographics of the P&C Insurance Industry in Canada, about 69% of P&C industry employees surveyed were women while 31% were men. A total of 7,327 individuals participated in the survey, out of an estimated 124,900 working in the industry at the time. 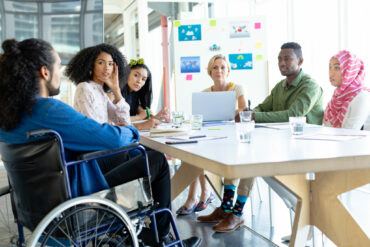 “Minority group representation in the P&C insurance industry generally remains low compared to the workforce as a whole and to comparator industries, such as professional and financial services,” the Conference Board of Canada said at the time.

Some organizations have a voluntary self-identification process, Mary Lou Maher, Toronto-based global head of inclusion and diversity for KPMG, said in an interview this past August.

What you can and cannot ask employees about demographic data varies by country, said Saad Mered, CEO of Zurich Canada.

“We are pushing in every country [in which Zurich writes insurance] to do [self-identification surveys] as much as we can,” Mered said in an interview this past July.  “We have not done that yet in Canada, but we have engaged in advanced conversations with a specialist organization in Canada to help us do that.”

For its part, at KPMG, when you get hired, you are asked to identify data such as your race, religion, sexual orientation and whether or not you have a disability, said Maher. This is voluntary and not mandatory.

If your firm has something similar, it is important that corporate executives pay attention to the percentage of employees who do not voluntarily disclose, Maher said.

“If for example about 30% of your people are not self-identifying in any way, that tells you a lot about your organization and the comfort people have around identifying themselves. At KPMG, we really focus on making people feel comfortable that they can bring their whole self to work and that they feel comfortable self-identifying in those surveys. Because the data you can get from these surveys is valuable to the organization when you are trying to create a strategy to be more inclusive.”