TORONTO – Canadians have started receiving emails from Marriott International, informing them of a recent breach of customers’ personal data held by their Starwood hotel properties.

The U.S.-based hotel giant, which is also behind brands including W Hotels, St. Regis, Sheraton and Westin, says in the email that the breach may have impacted up to 500 million guests. 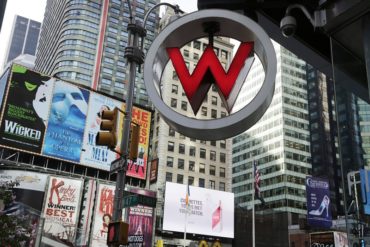 FILE – In this July 31, 2013, file photo, the logo for the W Hotel, owned by Starwood Hotels & Resorts Worldwide, is seen in New York’s Times Square. The information of as many as 500 million guests at Starwood hotels has been compromised and Marriott said that it has discovered that unauthorized access to data within its Starwood network has been taking place since 2014. The company said Friday, Nov. 30, 2018, that credit card numbers and expiration dates of some guests may have been taken. (AP Photo/Mark Lennihan, File)

The company says the contact information, passport numbers, arrival and departure information, reservation dates, and credit card information of up to 327 million guests may also be entangled in the incident.

Marriott says unauthorized access to such data has been occurring since 2014, but was only recently discovered.

Marriott says it has been sending emails with these details to guests since Nov. 30, when the breach was revealed.

The company did not respond to a request for comment regarding how many Canadians have, or are expected to, receive the emails.