OTTAWA – The union representing 50,000 employees at Canada Post panned the latest contract offers from the corporation Thursday, calling them “disappointing” and keeping alive the threat of a work stoppage as the busy holiday online shopping season approaches. 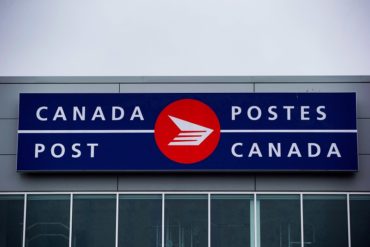 The Canada Post logo is seen on the outside the company’s Pacific Processing Centre, in Richmond, B.C., on June 1, 2017. New contract proposals from Canada Post to 50,000 of its employees have failed to put an end to the threat of a work stoppage at the post office. THE CANADIAN PRESS/Darryl Dyck

On a proposal directed at rural carriers, the union said, “We have a long way to go to achieve a negotiated collective agreement.”

The possibility of a work stoppage has hovered over Canada Post since Sept. 26 after postal workers voted overwhelmingly in late summer in support of a potential walkout to back their contract demands.

But that initial deadline passed without any job action being launched, with CUPW saying it would stay at the bargaining table so long as there was progress in the talks.

“Those are discussions that we’re having daily, based on developments,” he said.

Job action could include a full or partial walkout, or a lockout, after a 72-hour notice period.

The threat of a work stoppage over the holidays has forced companies that rely on Canada Post for parcel deliveries to make alternative plans to ensure their customers receive orders. However, it may be difficult to fill all of the service gaps in the event of a shutdown.

Canada Post is the biggest parcel shipping company in the country, having delivered about one million parcels per day during the holiday season last year – an increase of 20 per cent over the same period in 2016.

Utilities have also been urging their clients to register for online billing, reminding them that invoices must still be paid regardless of whether they are mailed out.

Canada Post said its global offers to rural and urban carriers include improvements to pay, benefits and job security.

But the job security proposals are limited, particularly for rural and suburban carriers, CUPW said in a statement on its website.

“For those eligible to job security, Canada Post would be allowed to assign you or not to a vacant position within a 75 km radius from your installation,” the union said.

“This is a very complex proposal and a substantial amount of clarification is required to fully understand its impact.”

Canada Post also rejected demands that those same carriers get paid an hourly rate – and for all hours worked – and that the corporation guarantee minimum hours, said CUPW.

For both rural and urban carriers, the post office offered wage increases of 1.5 per cent annually under a four-year contract – virtually unchanged from proposals tabled Sept. 7. The union is seeking a 3.5 per cent hike in pay.

“The offers are disappointing,” said Palecek.

“Canada Post still hasn’t addressed any of our major issues.”

CUPW has been pushing Canada Post to offer banking services in communities underserved by the big financial institutions.

But he noted that no details about what those services might involve or when they could be launched have been forthcoming.