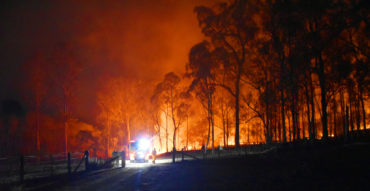 The World Economic Forum is sounding the alarm that the top most-likely global risks are all environment-related.

It’s the first time a single category has occupied all five top spots, Børge Brende, World Economic Forum president, wrote in the report. “On the environment, we note with grave concern the consequences of continued environmental degradation, including the record pace of species decline,” he said.

Despite the environment being labelled as a top risk, and the need for climate action, “the UN has warned that countries have veered off course when it comes to meeting their commitments under the Paris Agreement on climate change,” he added.

Asked about the impact of certain risks, more than 1,000 respondents to the forum’s Global Risk Perception Survey put climate action failure at the top of the list. Weapons of mass destruction slipped to second after three years as the top concern. Biodiversity loss and extreme weather were next, followed by water crisis. So environmental concerns dominate both lists.

“Climate change is striking harder and more rapidly than many expected,” said the report’s executive summary. “The last five years are on track to be the warmest on record, natural disasters are becoming more intense and more frequent, and last year witnessed unprecedented extreme weather throughout the world.”

On the topic of biodiversity loss, the report highlighted that the current rate of extinction is 10 to 100 times higher than the average over the last 10-million years. “Biodiversity loss has critical implications for humanity, from the collapse of food and health systems to the disruption of entire supply chains,” the report stated.

Produced in partnership with Marsh & McLellan and Zurich Insurance Group, the report also warned of trade restrictions placed around the world.

“This comes as G20 economies hold record high levels of debt and exhibit relatively low levels of growth,” Brende said. “Ammunition to fight a potential recession is lacking, and there is a possibility of an extended low-growth period, akin to the 1970s, if lack of coordinated action continues.”

He also warned of the “potential de-coupling” of the American and Chinese economies, the world’s largest economies, as another source of concern. “The question for stakeholders — one that cannot be answered in the affirmative — is whether in the face of a prolonged global slowdown we are positioned in a way that will foster resiliency and prosperity.”

Brende further warned of risk in an “unsettled geopolitical environment,” one in which new centres of influence and power forming are testing current alliances and institutions. “While these changes can create openings for new partnership structures, in the immediate term, they are putting stress on systems of coordination and challenging norms around shared responsibility,” he said. “Unless stakeholders adapt multilateral mechanisms for this turbulent period, the risks that were once on the horizon will continue to arrive.”

It’s not all doom and gloom – yet. But the window of opportunity to right the ship is closing. “Despite global divisions, we continue to see members of the business community signal their commitment to looking beyond their balance sheets and towards the urgent priorities ahead,” Brende said.