“Most work in the oilsands and in the oilsands everybody undergoes intensive safety training,” said Edward Struzik, author of Firestorm: How Wildfire Will Shape Our Future and a fellow at the Institute for Energy and Environmental Policy at Queen’s University in Kingston, Ont. “The first rule of safety training is listen to what people tell you to do.” 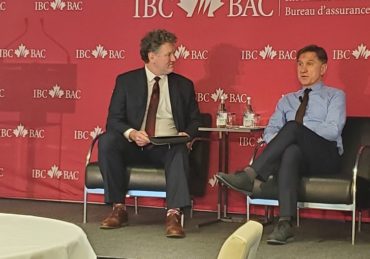 Struzik was responding to a question from moderator Craig Stewart, IBC’s vice president of federal affairs, about why more people weren’t fatally injured during the May 2016 Fort McMurray wildfire, which cost the insurance industry about $4 billion. It had been said that about 88,000 people were successfully evacuated with no reported injuries or fatalities, but media reports said claimed two people were killed in a vehicular collision during the evacuation.

In this case, RCMP officers told those “big, burly guys [that] are going to pick up their kids” that they couldn’t go any further due to the fire, Struzik said during his Nov. 28 presentation. Struzik added that the RCMP officers told him that had it been another town, the evacuation had wouldn’t have gone as smoothly, “but those guys knew this is what we do” to be safe.

Other factors contributing to the successful evacuation include that the city had just completed two extra lanes coming in and out of town, and that the wind suddenly changed direction as the fire came in and moved it away from the city.

Stewart asked “why can’t we get this right?” in regards to wildfire response, and why (in general) people don’t listen to experts. “To put it bluntly, we’re just not killing enough people,” Struzik responded. “Had 3,000 people died, we would be in a completely different situation right now. I think that is probably the biggest driver – we’ve been dodging the bullet.”

The RCMP had anticipated 3,000 deaths from the fire, Struzik noted. And it’s just a matter of time before there is a deadlier fire in Canada. “In the summer, you could have 3,000 people up there [in Fort McMurray]. There is an 80- to 100-year-old forest that is ready to burn.”

Struzik said “we’ve got to start drawing lines in the sand”: evacuation procedures need to be based in law, so nobody takes the blame. “We can’t leave it in local hands all the time because that just creates an organizational nightmare for dealing with the fire.”

During the Fort McMurray wildfire, the RCMP felt they weren’t really in the loop with the emergency response team. The local RCMP superintendent and the second-in-charge both got cellphone calls after the fire had spread, Struzik reported.

“It’s the first the superintendent knew that fire was in town and then her second-in-command got a similar cellphone phone and they realized the fire’s in town and they didn’t know it,” Struzik said. “They went to the window and there was a line-up of cars all heading out and they were sitting in their offices. That’s just not the way to respond to a wildfire situation.”